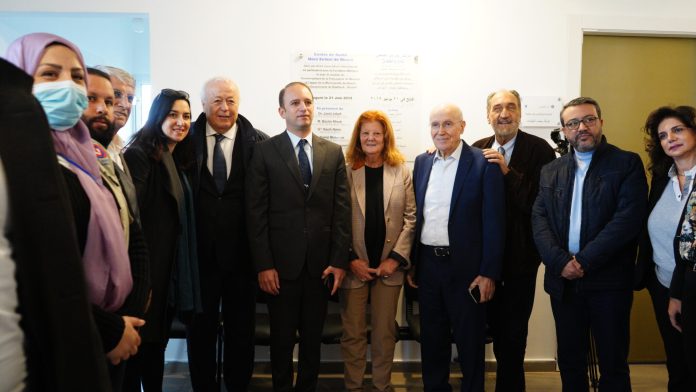 Dr Kamel Mohanna, president of Amel Association International, welcomed Mr Alain Mérieux, president of the Fondation Mérieux and his spouse in Amel’s mother-child center in Douris. They were accompanied by a delegation composed of Dr Duraid Sabbagh, chief of the department of research, Dr Josette Najjar, the representative of the Fondation Mérieux in Lebanon, as well as the governor of Baalbek-Hermel, Bashir Khader, Elias Abi Aad, representative of the Principality of Monaco, and the representative of the Minister of Health, Lara Barrake, and the president of the Union of Municipalities of Baalbek, Shafiq Shehadeh. Mr. Ahmed Abboud, Dr. Zeina Muhanna and Virginie Lefèvre were also present in their capacity as members of Amel’s board of directors. 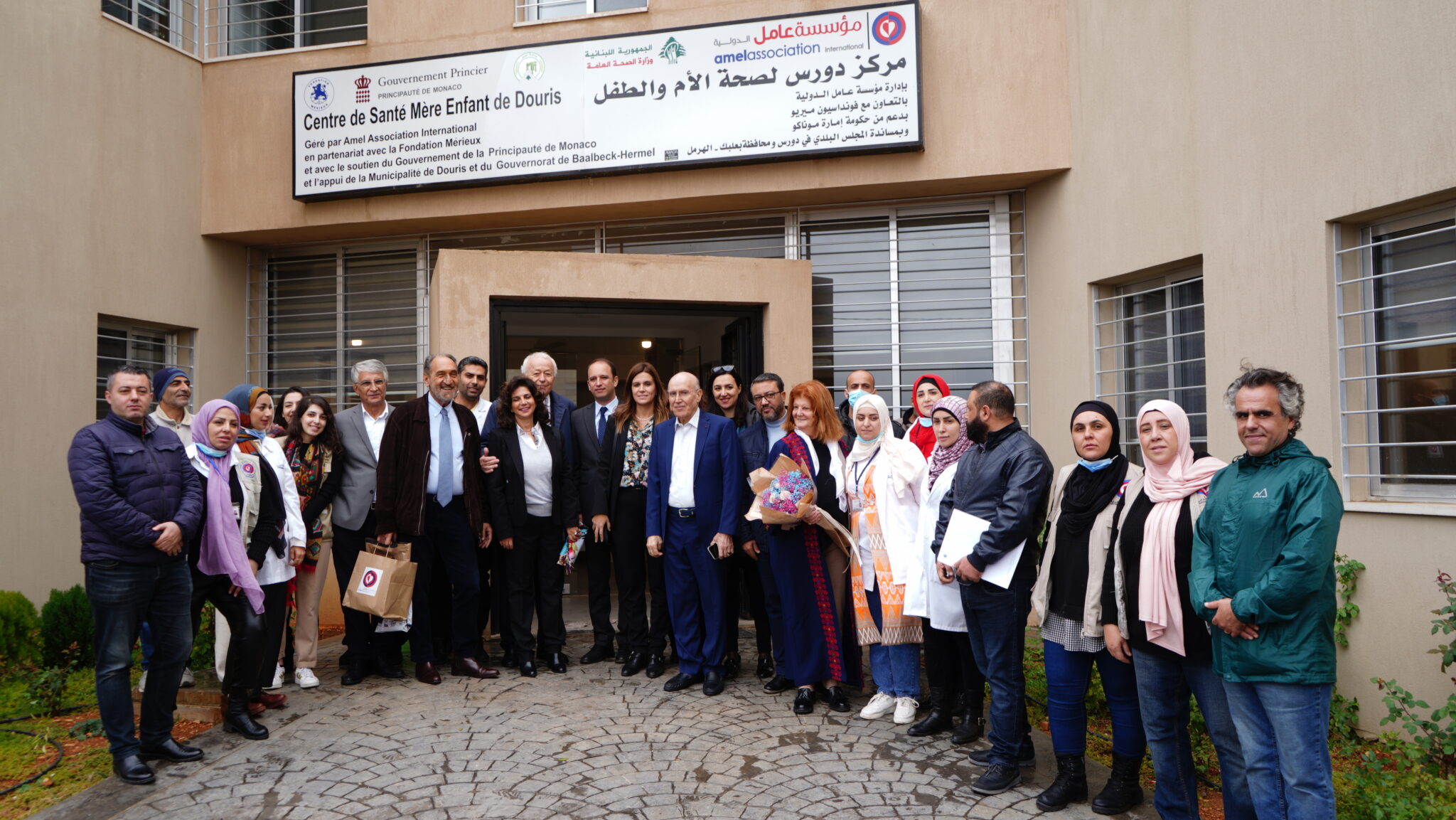 This visit allowed the delegation to better understand the work realized in Amel’s centers, equipped with numerous programs and departments based on a narrow collaboration with the local population. The visit’s purpose was also to inaugurate a new room in the center bearing the name of Mrs. Chantal Mérieux, a sign of the Fondation Mérieux’s contribution to the construction of this center dedicated to the support of the local population and its surroundings. 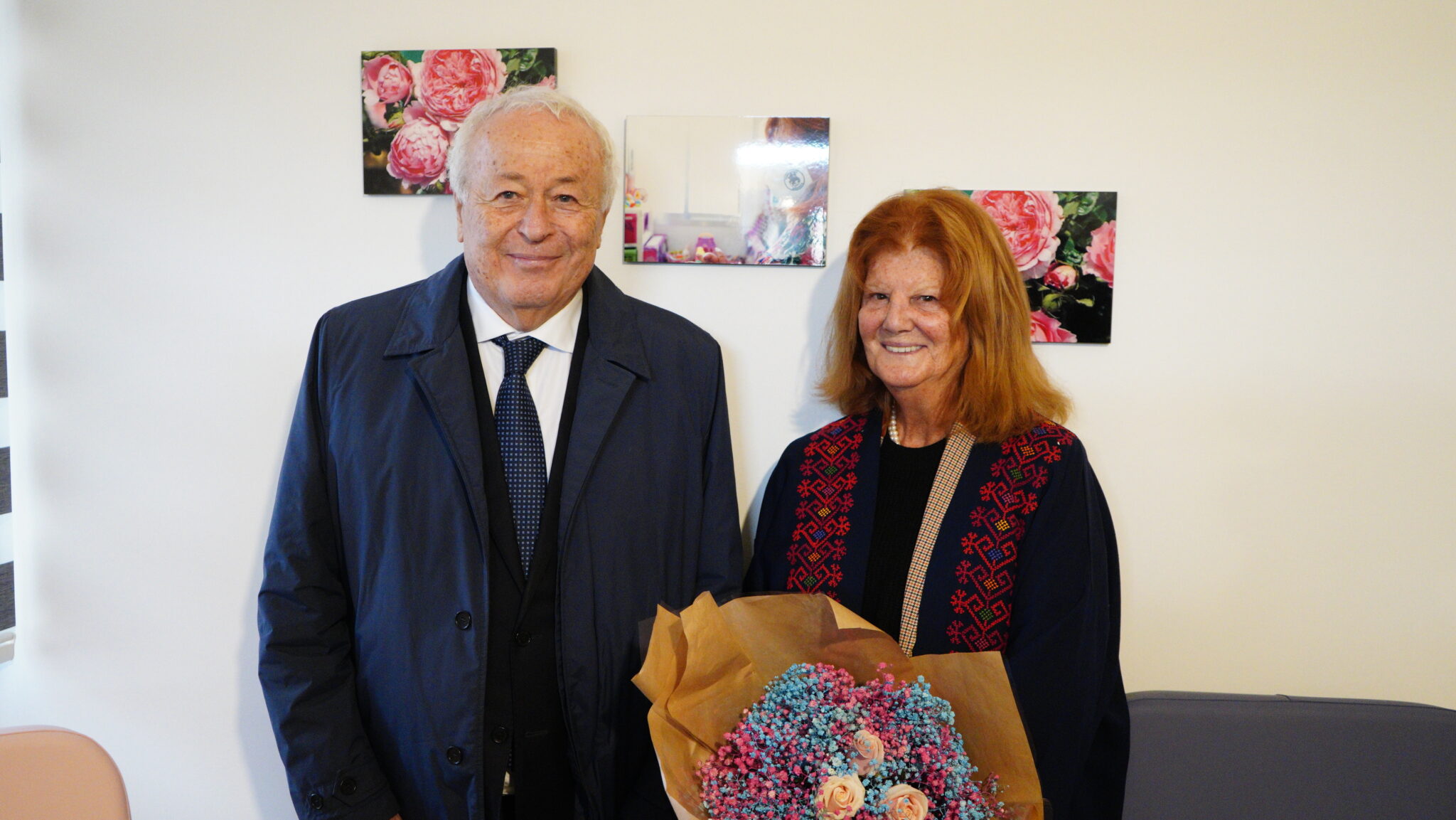 The mother-child center of Douris managed by Amel implements a multitude of programs in cooperation with the Fondation Merieux, the Principality of Monaco, the municipality of Douris, the Union of the Municipalities of Baalbek and the governor of the Baalbek-Hermel region. In particular, it offers its beneficiaries services in the areas of primary health care, SRH, empowerment of women and girls, protection against gender-based violence and development, not to mention the various social activities recently added to the center’s missions during the current year.

The delegation was able to speak with members of Amel’s teams in the field. Every month, several hundred consultations and social interventions are carried out, including pediatrics, gynecology, cardiovascular diseases and dental care. In addition, vaccination, distribution of medication, medical analysis and health awareness sessions are provided free of charge to the beneficiaries. The center also conducts awareness campaigns to improve the prevention of diseases such as cholera or COVID-19, and puts in practice a mental health program implemented by Médecins du Monde, in partnership with Amel 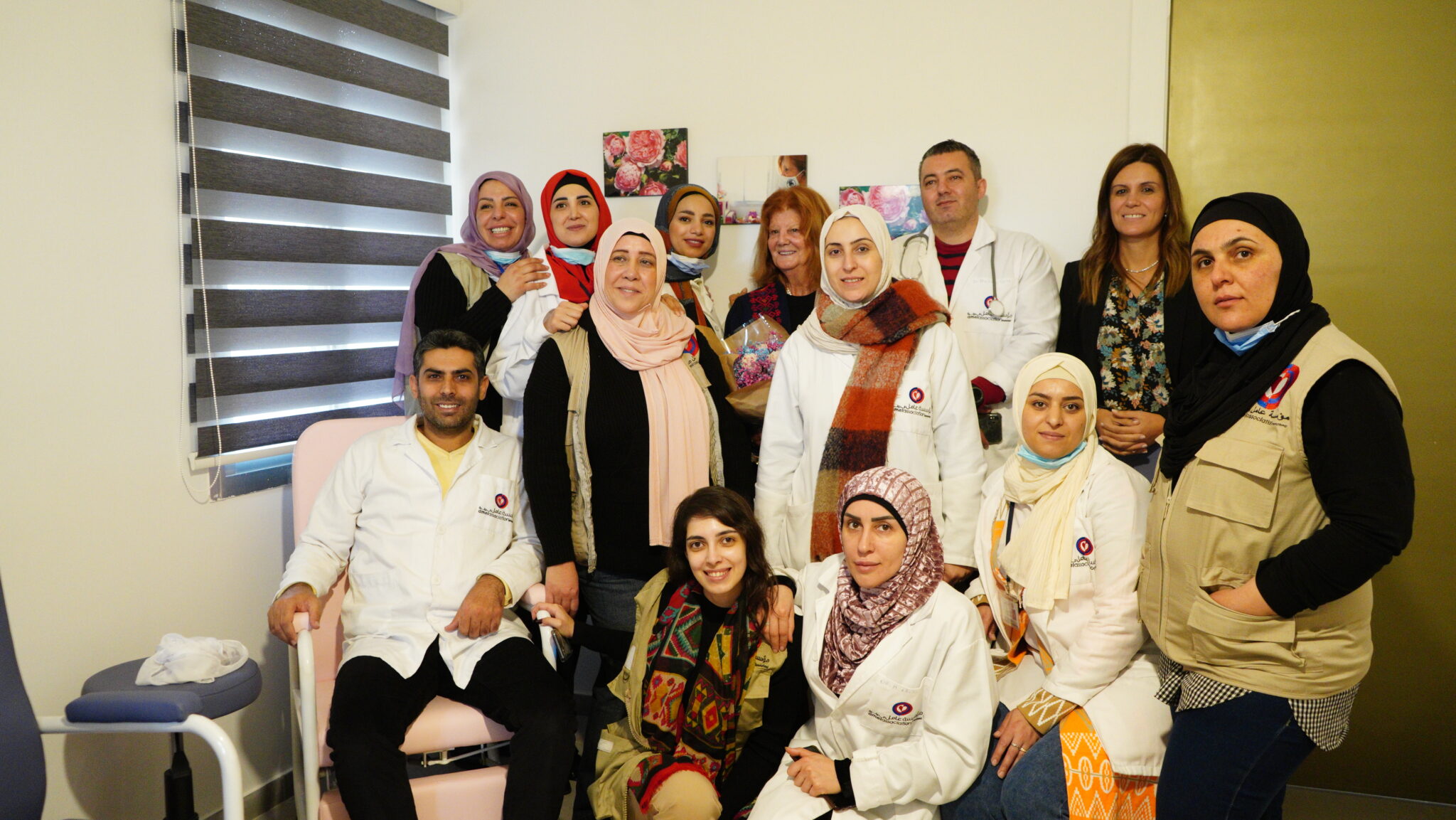 Finally, the center of Douris permitted the association to deploy in the neighboring cities and villages its mobil vaccination campaign against cholera, launched by the ministry of Public Heath and implemented by Amel and its international partners in the Bekaa and North Lebanon.

Mr Khader, governor of the Baalbek-Hermel region, expressed his gratitude towards the Fondation Mérieux which through its humanitarian initiative, contributed to supporting the Bekaa region in cooperation with Amel Association International. Mr Khader also underlined the necessity to reinforce the humanitarian response capacities, in oder to help the population that is passing through the worst economic crisis that Lebanon faced. Finally, he highlighted the commitment of the governorate in granting aid to all the populations left behind in the region of Baalbek-Hermel.

On her part, Dr. Josette Najjar presented the development of the structure of the Douris center and praised the teamwork implemented with the various partners.

The president of the Union of the Municipalities of Baalbek, Mr. Shafiq Shehadeh, also stressed the importance of this center and the support it provides to the population of the region and its surroundings, while the country is experiencing difficult circumstances, especially with regard to access to health, which has become increasingly difficult for a majority of the population. Finally, he thanked all the actors present for the exemplary cooperation they have shown, since it is in the interest of all.

For his part, Dr. Mohanna stressed the importance of joint efforts and deepening local and international partnerships to improve the protection of the populations residing in Lebanon and preserve their dignity in this difficult context. It is according to him fundamental to preserve the right of populations to development, which is one of the cornerstones of Amel’s commitment over the past decades. In cooperation with its partners and through its 30 primary health care centers, 6 mobile medical units and 1,400 employees and volunteers, Amel has managed to provide access to primary health care and development programs to the most vulnerable populations.

Amel Association International, through its local and international branches, but also through its partnerships with international organizations such as Fondation Mérieux, fights for a refoundation of the humanitarian sphere, which must be committed and militant in order to preserve the fundamental rights of marginalized populations. The association also works for the construction of a more just and humane world, in a context where human values are in real decline in the West. According to Dr. Mohanna, it is necessary to work together to establish a new and pioneering concept of humanitarian action, which would be based on solidarity and human dignity, as well as the refusal of double standards, especially between the North and the South, and the commitment to the just causes of peoples, foremost among which is the issue of Palestine, which is the essence of all humanitarian action.

The philosophy of Amel, a non-sectarian civil association, is to preserve human dignity within societies, and to empower individuals, regardless of their choices, in order to achieve a state of social justice in Lebanon, and to build a more just and humane world. According to Dr. Mohanna, the partnership that started with Fondation Mérieux, the Principality of Monaco, the municipality of Duris, the governorate of Baalbek-Hermel and the Ministry of Public Health is the only way to preserve the fundamental rights of individuals and human dignity.

Also, Dr. Mohanna proposed to develop activities in the centers and in the regions in order to face the multidimensional crisis that Lebanon is going through, a project that was welcomed by Mr. Alain Mérieux.