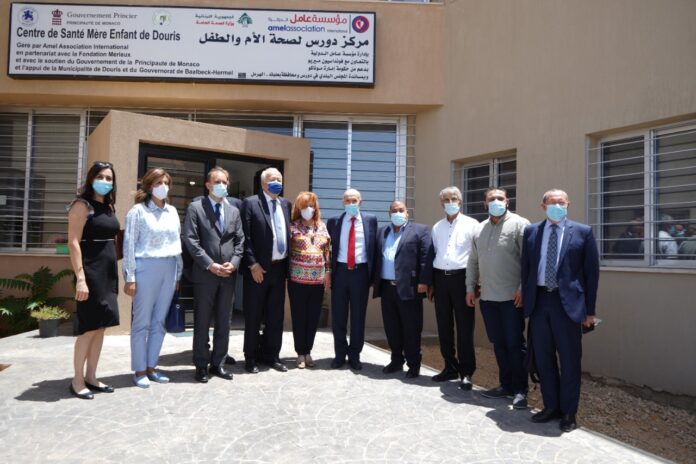 Mérieux: We are committed to protecting the most vulnerable groups to support Lebanon.

Khoder: We will take advantage of this cooperation to meet the needs of people and preserve their dignity.

Ghossein: We welcome this joint initiative to support the people of the Bekaa.

Mohanna: The test ends where the work of development and solidarity begins. 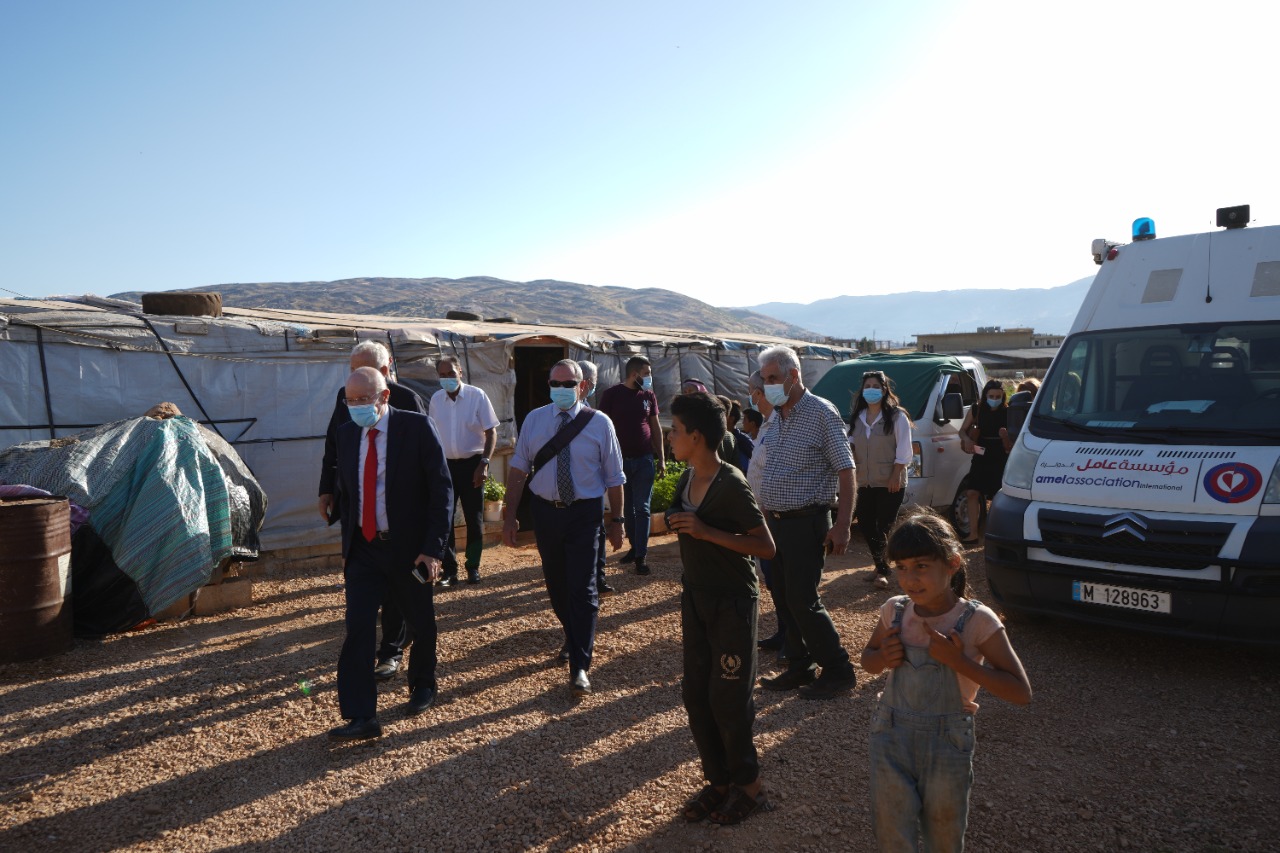 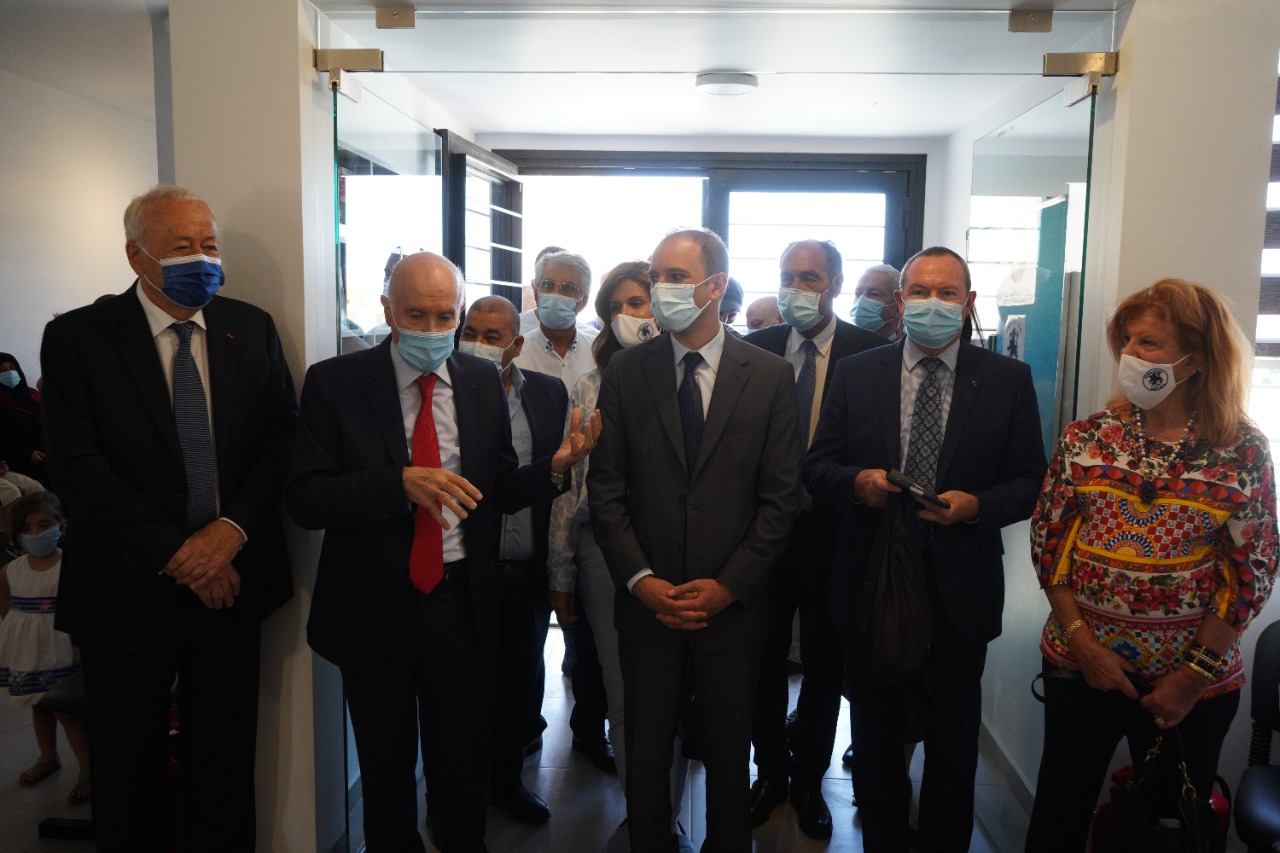 The President of Fondation Mérieux, Mr. Alain Mérieux and his wife, accompanied a delegation composed of the Director of the Foundation Jean-Pierre Bousser, the representative of the Foundation in Lebanon, Dr. Josette Najjar and Dr. Robert Sabbagh to visit the centers of Amel Association International (Amel) in the Bekaa. They were received by the President of Amel, Dr. Kamel Mohanna, and the members of Amel’s board of directors, Mr. Ahmed Abboud, Dr. Zeina Mohanna as well as Dr. Caroline Tarraf, Medical Coordinator, Dr. Malak Khiami and the center’s team, in the presence of the Governor of Baalbek-Hermel Bashir Khoder, the Mayor of Douris Elie Al-Ghussein, his deputy Mr. Shafik Shehadeh, and the members of the Municipal Council.

The visit started with the municipality of Douris, where the mayor, Elie Al-Ghussein, presented a plaque of appreciation in honor of their efforts to Mr. Alain Mérieux, Governor Bashir Khoder, Dr. Kamel Mohanna and Dr. Josette Najjar. Then, the visit ended at Amel Mother and Child Center in Douris, which works in cooperation with Fondation Mérieux, the municipality of Douris and the governorate of Baalbek-Hermel. The center’s team presented the center’s various intervention plans in the region where it provides hundreds of medical consultations and social services per month to the refugee and Lebanese populations. At the same time, Amel provides health and social education sessions inside the center to improve health prevention, especially in connection with COVID-19, in addition to the mental health program implemented by Médecins du Monde (MDM) inside the center in partnership with Amel.

At the end of the visit to the Douris center, a room was inaugurated in the center in the name of Mrs. Chantal Mérieux as a token of appreciation for the Foundation’s contribution to the construction of this center.

Afterwards, the delegation visited the Kamed Al-Loz Medical and Social Center, which has been serving the city and its surroundings for more than 35 years, and has played a major role in supporting the population and strengthening their tenacity, especially in connection with COVID-19. The delegation was received by the head of the center, Dr. Hussein Madi, in the presence of the deputy mayor Bassam Taha, and the center’s team, which works on various health and development programs aimed at promoting development in the Bekaa region, through services within the center, through the mobile clinic, the mobile educational unit, and the home visit program for people infected with COVID-19, launched in early 2021. 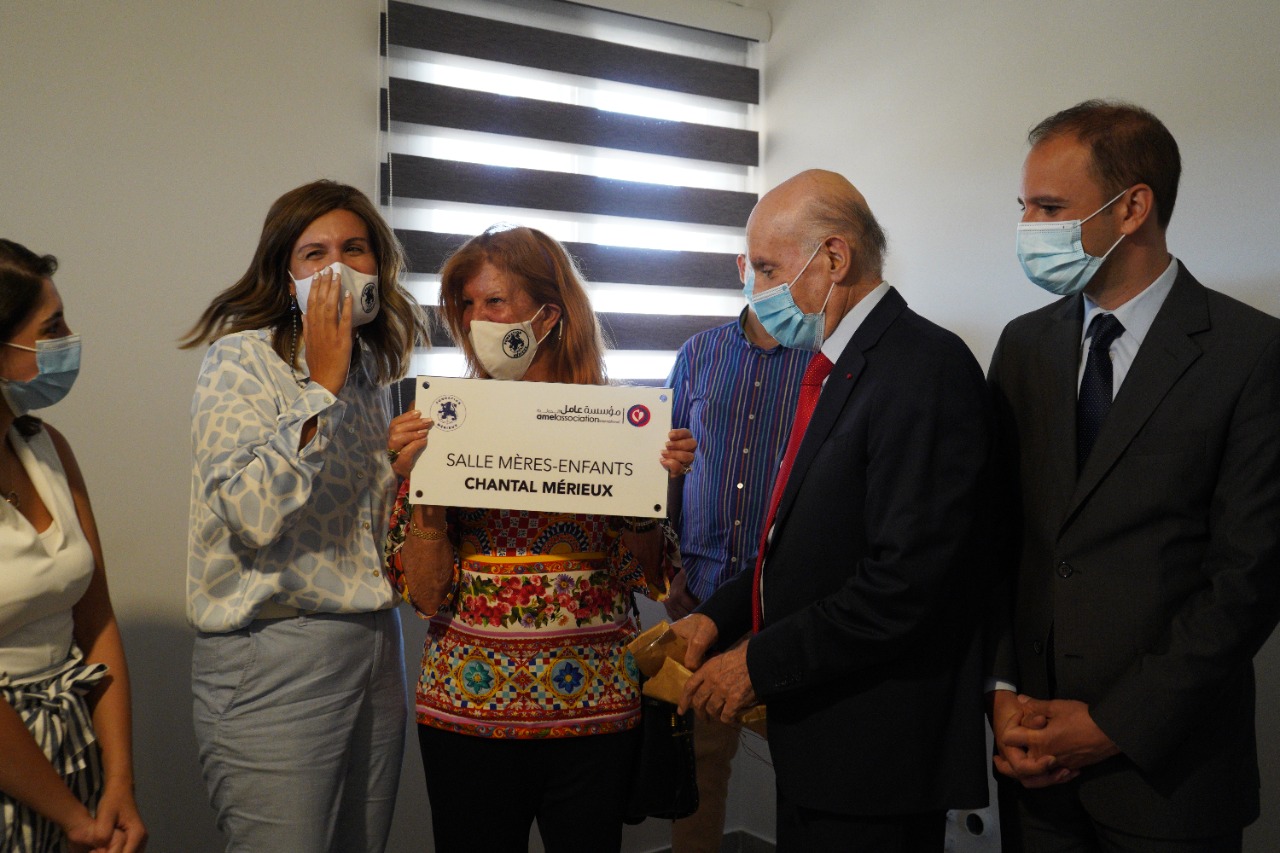 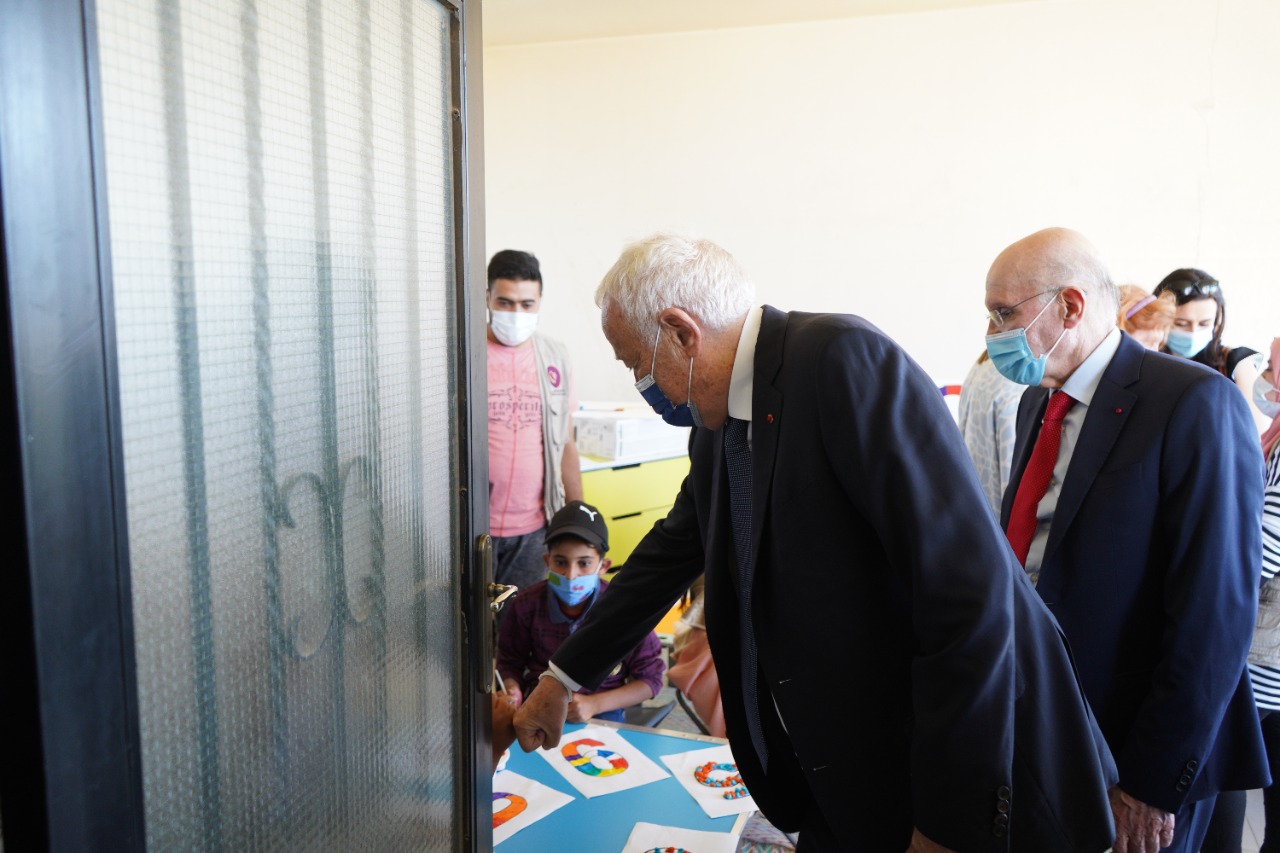 The visit ended in an informal refugee camp with the mobile medical clinic and the mobile educational unit that works with the children of the camp to ensure that the 600 accompanied children have access to the right to education in addition to psychosocial support. The delegation had the opportunity to exchange with the medical and social team on different topics including the health and psycho-social situation of the vulnerable populations as well as Amel’s interventions in this framework, but also to prevent COVID-19. The delegation listened to the testimonies of several women who spoke about their living conditions and the support provided by Amel over the past 10 years through its programs and the solidarity of its team.

Within the framework of this visit, several participants took the floor.
Governor Khader thanked, on behalf of the people, Mr. Mérieux for his initiative to support the Bekaa region, which suffers from historical deprivation, especially today in the face of the crises Lebanon is going through, stressing the need to take advantage of this opportunity to move the country forward with a new mentality by meeting the needs of the people and safeguarding their rights.

Then, the Mayor of Douris, Mr. Elie Ghossein, praised the humanitarian initiative and the joint work between Amel, Fondation Mérieux, the Governorate of Baalbek-Hermel and the Ministry of Health in the interest of the people of Douris and the Bekaa region in general, which supported Lebanon in the most difficult circumstances in order to help people endure and overcome this step towards a prosperous Lebanon that we dream of and work for, stressing that the municipality is working to provide all types of support possible in order to preserve human dignity.

Finally, Dr. Mohanna emphasized the importance of concerted efforts and deepening local and international partnerships in order to strengthen the immunity of people in Lebanon and preserve their dignity under these difficult circumstances. He considered that the “right to health” and development is one of the most important humanitarian issues that Amel has been promoting for four decades. The association constantly seeks to correct public policies and support the health sector to guarantee the right of everyone to access health without discrimination. For this reason, Amel, in cooperation with its partners, has mobilized throughout the Lebanese territory, 28 medico-social centers, in addition to 6 mobile clinics run by a team of 1000 workers and volunteers, to provide access to basic health and development programs, especially for the most vulnerable groups, in order to enable them to live in dignified conditions.

Dr. Mohanna stressed that Amel continues to fulfill its duty and care for this group of people, and this reflects part of Amel’s philosophy, the non-denominational civil association, which is concerned with preserving the dignity of the human being and empowering him/her within societies, to achieve a state of social justice in Lebanon, and to build a more just and humane world. He noted that the partnership initiated with Fondation Mérieux, the Principality of Monaco, the Municipality of Douris, the Governorate of Baalbek-Hermel and the Ministry of Health for the construction of the Mother and Child Center in Douris, is a successful pilot initiative that will extend its impact to other regions and sectors, in order to support Lebanon in the current circumstances.

Dr. Kamel Mohanna thanked Fondation Mérieux, represented by its president, Mr. Alain, saying: “Your stand by the Lebanese people without bias or hesitation, and rise above all political calculations and narratives is the model of solidarity we need from all countries in the world and those with influence and decisions, because Lebanon’s ordeal is ending. From where the work of development and solidarity begins, and the voice of success rises above the voice of division and conflict.”