Home What We Do Thousands of educational games for children, in partnership with Les Enfants de... 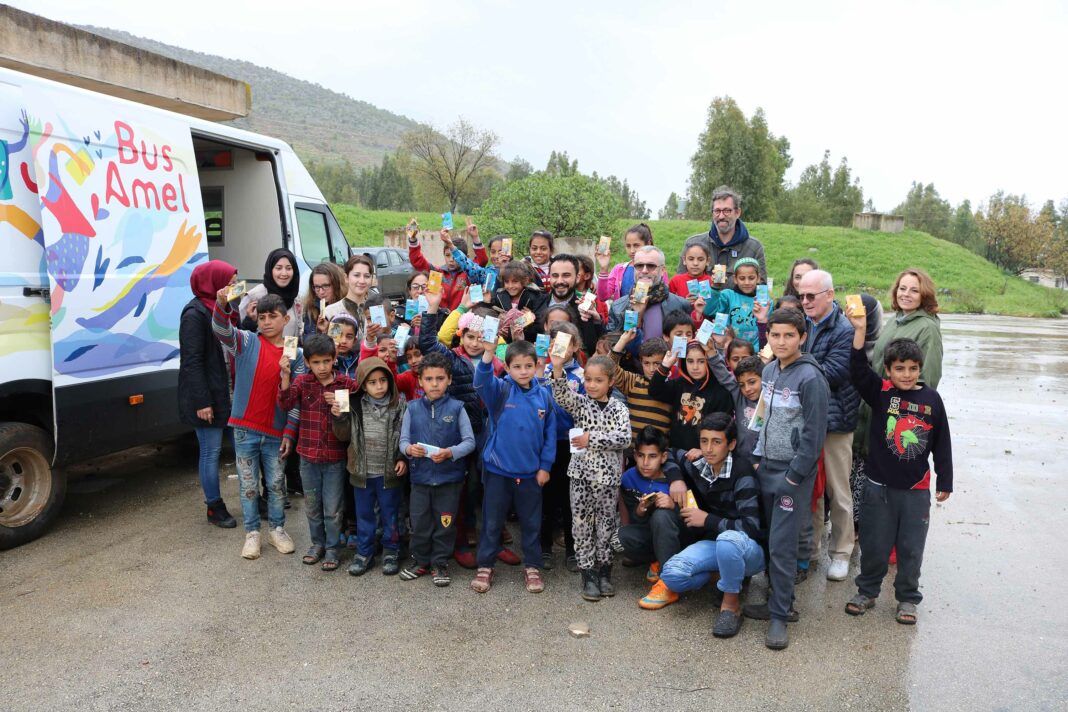 Les Enfants de la Méditerranée (LEM) is a French association that supports the cultural activities of Amel’s projects in Lebanon, in partnership with Cirquenciel, a circus school. Cirquenciel animators set up circus activities in some refugee camps, these activities being facilitated by Amel and supported by LEM.

Recently, LEM has partnered with Bioviva For Life to provide 4000 educational games to be donated to Amel and distributed to children benefiting from educational and child protection projects.

Gathered in the Cirquenciel premises in Jisr el Wati (Beirut) on Friday 29 March, representatives of LEM, Bioviva and Cirquenciel, accompanied by Amel’s founder, Dr Kamel Mohanna, inaugurated these educational games and quickly presented to the many guests present that evening the history of their organizations, their commitments in Lebanon and their participation in this project.

This reception was also an opportunity for Dr. Kamel Mohanna to recall Amel’s commitments since its creation in 1979 and the alarming figures on the educational situation for vulnerable children. Of the 1.5 million Syrian refugees in Lebanon, about 70% live below the poverty line, and this has terrible consequences for the education of children. Of the 488,000 Syrian refugee children of school age (3-18 years), less than 50% are currently enrolled in formal education, according to UNICEF. 78% of children are reported to be affected by violent disciplinary practices at school or at home, and 200,000 are also forced to work. Amel’s Education Programme therefore aims, in response to this major challenge, to support children who do not have access to this fundamental right, this “lost generation”, through three components:

Following these interventions, a show composed of several very successful circus acts was performed by the students of the Circus Circus School of Jisr el Wati. This centre aims to encourage children and young people to adopt an independent, supportive, responsible and committed lifestyle through circus arts education.

On Saturday, March 30, LEM and Bioviva representatives were accompanied to the Khiam region, where Amel has had a centre for more than 30 years. This was an opportunity for LEM and Bioviva to learn more about the work of the Amel Bus, which aims to provide educational support to children in informal settlements. After a visit of the 3 classes present on that day and exchanges with the children and the Mobile Unit teams, the children were brought together so that the teams could explain to them how the educational games work and, finally, distribute it to them. Articulated around the world’s animals, the games were quickly assimilated and adopted by the children, delighted.

Finally, on Wednesday, April 3, representatives of LEM and Bioviva went with Amel to an informal camp in Kamed el Loz, not far from the local Amel centre, to attend a performance by children who had benefited from circus activities for 6 months thanks to the partnership between LEM, Amel and Cirquenciel. The next day, these same children went to the Cirquenciel circus school in Beirut to enjoy the many facilities and installations offered in the centre.