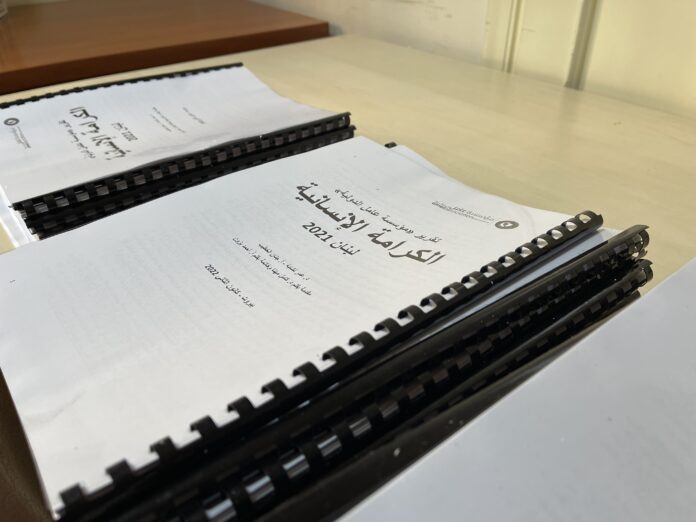 In the midst of the economic crisis afflicting Lebanon, Amel Association International launched its annual report entitled “Human Dignity in Lebanon” for the year 2021. The report inspects the deteriorating socio-economic situation in Lebanon. It does so by making a distinction between Rights and Dignity, as Amel has been working for five decades to implement humanitarian programs that fully take into account both aspects, in line with the Universal Declaration of Human Rights The purpose of the report, which is the result of a study conducted by two researches Dr. Omar Nachabe and Ms. Jinan Al Khatib and their assistants, attempts to identify an accurate methodology for measuring Human Dignity indicators, and for describing the situation of Human Dignity in Lebanon in particular. By surveying the views of the people who receive care and support in Amel centers across Lebanon, the researchers identified the best possible practices to implement dignified humanitarian programs, based on the model constructed by Amel over the past decades. The report relied on five main criteria to measure the state of Human Dignity, these were; freedom, peace, security, justice, respect and access to basic Rights. The researchers studied, through a set of statistical tools, the relationship between a sample of interviewees and Amel’s team within a group of community centers in the South, Bekaa, Beirut and Mount Lebanon regions. These answers were then compared with the relationship the interviewees had to other public and private entities. This was done to assess the different ways in which the interviewees were treated whilst accessing aid, thus pointing out that Human Dignity is often being violated and that organizations tend to omit this dimension of aid. The main conclusion ensuing from the study was that all residents of Lebanon are suffering alike, and that the economic differences between the Lebanese citizens, refugees and immigrants no longer exist due to the deterioration of the economy. Furthermore the study showed that although Amel has provided over one and a half million services across its centers over the past two years, people are still suffering and their needs are still growing. The report warns that the situation in Lebanon is dramatically deteriorating and is putting people in danger, due to the absence of economic solutions and remedies, at least in the foreseeable future. However, and despite this bleak reality, the researchers were able to identify several distinct models within Amel’s centers, which they have recommended should be generalized and implemented in all sectors across Lebanon. One strong marker in the study was the fact that less than 40% of respondents affirmed that their dignity was preserved to some extent, whilst outside in interactions they engaged in outside of Amel the vast majority of people felt that their dignity was severely encroached on. This led many of the respondents to seek out Amel’s services more than they would those of other organizations. In addition to the information and shocking numbers that the report monitors, it also highlights, on the other hand, that a pioneering humanitarian model based on involving people in solutions and programs, which Amel Association has embodied over the past 43 years greatly benefits those in need whilst giving them more space to engage directly in the protection of their own dignity and the access to their basic human rights. The founding President of Amel Association, Dr.

Kamel Mohanna stated during the virtual launching: “Amel, through its struggle over the past decades, aims to build the foundations of change and a state of social justice, by presenting a practical model, because most of the progressive movements in our Arab world have focused on political rights and national liberation, but neglected economic and social rights, while we consider in “Amel” that the path to democracy passes through development, and that national liberation must be accompanied by social justice”. He also added, “The purpose of launching this report is not limited to describing the situation in Lebanon, but rather its main goal is to present the experience of the Amel, which works to liberate the Lebanese citizens from sectarian dependency, and treats the individual directly as a citizen and not as a subject. And increasing his awareness of some human rights issues on the one hand, and developing his capabilities on the other hand.”
Download the full report – for more information on the methodology and demography of the study, objectives, findings and recommendations.