Home What We Do The Ambassador of France in Lebanon visits Amel’s Mother & Child Center... 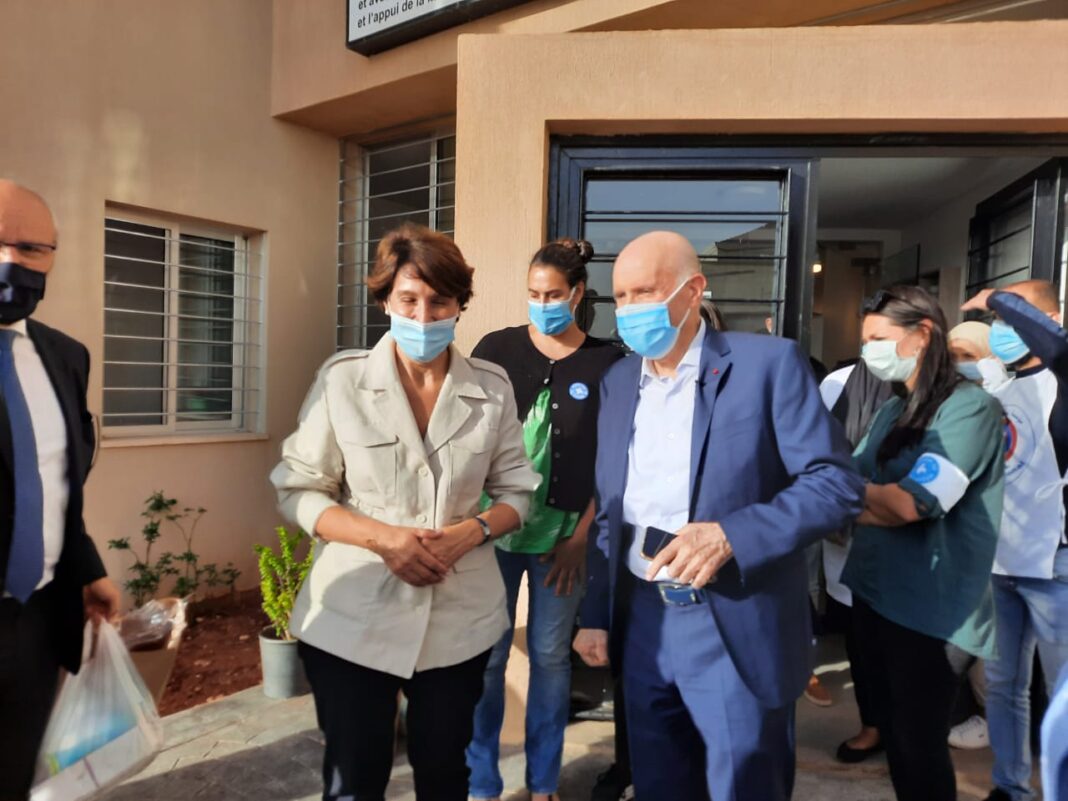 Dr. Kamel Mohanna, the president of Amel Association International, welcomed the delegation in the presence of Amel’s board members Ahmed Aboud, Virginie Lefèvre and Zeina Mohanna, in addition to the center’s team and members of the health committee. 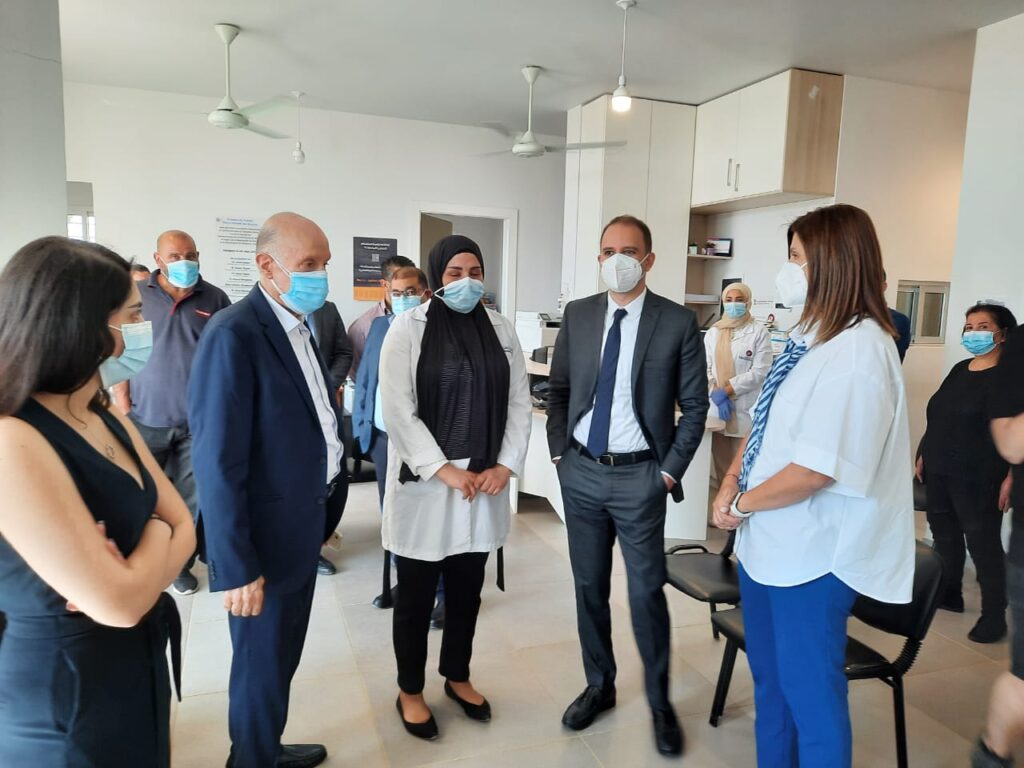 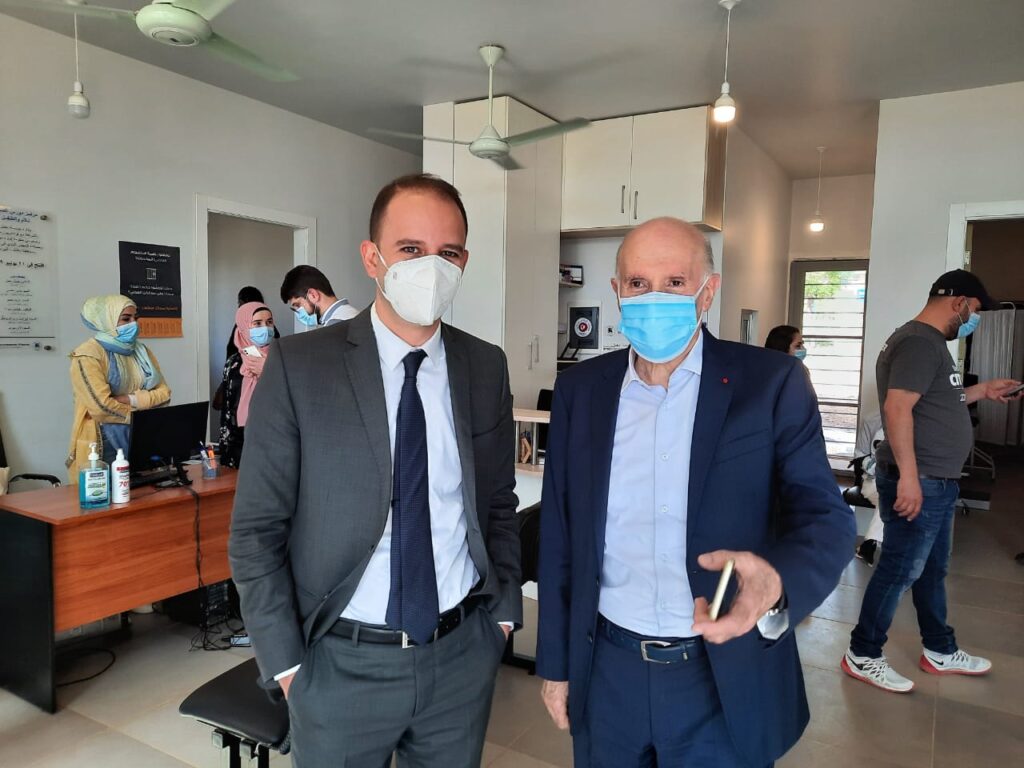 The visit began with a presentation of the hundreds of health inspections and services offered at the center including: maternal and child care programs for both members of the community and displaced persons alike, educational sessions to improve the level of prevention against health risks and raise awareness about social, humanitarian, and health issues in general, and mental health services implemented by MDM. The team at the center also explained their home care services for COVID-19 patients, including supplying oxygen tanks to those in need, as part of their involvement in the national plan of action against COVID-19.

Grillo stressed that France will continue to support the people during the current crisis in Lebanon through humanitarian programs that serve all without discrimination. She also praised Amel’s model of intervention which is based on strengthening the values ​​of citizenship and solidarity and which leads to the construction of a state of social justice.

The Governor of Baalbek Hermel Mr. Bashir Khodor, in turn, highlighted the crucial role of this center in the development of the region, which suffers from historical underdevelopment; he also stressed that the cooperation of civil society, municipalities, and local actors is the best solution to protect Lebanon from collapse, and that Amel’s past efforts to develop the region must continue to be used and spread.

Mr. Elie Ghossein, the mayor of Douris, underlined the importance and efficiency of this center, insisting on the essential role led by Amel in the fight against the spread of the COVID-19 pandemic in the regions and in the refugee camps.

Dr. Kamel Mohanna thanked the partners who contributed to the launch of this center as it stands as a symbol of solidarity, and also explained how the inauguration of this center advances Amel’s 40 year old effort to develop marginalized communities in the Bekaa region.

“Amel, our non-sectarian NGO will continue through our 28 centers, our six mobile clinics, our two mobile education units, our protection unit for children in the street situation and our 1000 full-time employees and volunteers to intensify these efforts, in order to provide safe access to health programs for all people residing in Lebanon. Our main slogan is: how do we work to improve the humanity of all, regardless of their choices and affiliations.”

Dr. Mohanna also underlined that the political and socio-economic crises in Lebanon require the support of the international community and that the assurance of human dignity and access to fundamental rights requires global solidarity and sense of responsibility, as well as presenting an effective model for building a state of citizenship, social justice and national liberation, which Amel has been doing for 4 decades.

In conclusion, Dr. Mohanna thanked Ambassador Grillo for her support, assistance and solidarity with the Lebanese people and specifically the Bekaa region, which has suffered from historic deprivation and still needs development in several sectors.