In the current era, we witness record rates of migration and asylum-seeking in the world, resulting from wars, conflicts, or difficult socio-economic conditions. In 2017, there was a record of 65.6 million refugees and immigrants, compared to only 33 million in 1997. As the number of refugees keeps reaching record numbers year after year, increasing percentages of these vulnerable persons become easy victims of trafficking gangs and smugglers.

Almost all countries and regions of the world are affected by human trafficking. Be they the origin of a trafficking route, part of the transportation route, or the final destination for those being smuggled, almost all countries have a role to play in putting an end to this practice. Given the international consequences of trafficking, as of 2013, the 30th of July has been marked as the World Day Against Trafficking in Persons. On this day, media outlets and  NGOs/INGOs try to shed light on the issue by spreading awareness and advocating for the protection of those trafficked. Nonetheless, suffering perpetuates and trafficking regrettably goes on every single day.

Given our convictions and continued dedication to upholding human dignity, Amel Association International has been working hard since 2011 towards the objective of helping the victims of trafficking who are based in Lebanon. For one, Lebanon is dealing with problems related to the exploitation and the physical and psychological abuse of domestic workers. According to the United Nations Office on Drugs and Crime (UNODC), 55% of the human trafficking that occurs in the Middle East is for the purpose of forced labor and domestic servitude. This makes it the single most detected form of human trafficking in the region. In light of this situation, Amel’s Support of Migrant Domestic Workers and Human Trafficking Program works to improve the mental and physical health of domestic workers by offering access to healthcare facilities and providing livelihood training as well as legal assistance.

Across the world, human trafficking follows some of the same concrete patterns that must be taken carefully into consideration. The UNODC defines this heartless and inhumane crime around three main elements: the act of trafficking in the form of “transportation”, the means of trafficking in the forms of “force and coercion”, and the purpose of trafficking related to “exploitation”. Despite these clear definitions, the line that distinguishes between the legal employment of migrant workers and the smuggling of migrant workers for illegal employment is sometimes vague. The main identifiable differences between those two lies in a clear expression of consent (or lack thereof), the existence (or absence of) exploitation, and the source of profits.

It is for these reasons that Amel launched the “Identification Manual for Care Providers” in August 2017. The manual was released within the framework of Amel’s “Support to Migrants and Counter – Trafficking” program led by Dr. Zeina Mohanna, with the hopes of building a “scientific diagnostic mechanism for victims of human trafficking”.

The victims, in the spotlight

Focusing on the victims, it has to be noted that translating the grave reality of human trafficking into numbers is difficult because of the illegality of the activity. The UNODC admits that “there is no methodologically sound available estimate”; it is for this reason that the victims are considered a ‘hidden population’

Nonetheless, the organization has detected 225,000 victims around the world since 2003. Several studies have also been published using aggregated UNODC data. Never before has such a huge number of victims been identified, which naturally leads to a worrying question: Is the progress in victim identification a result of a greater effort to tackle trafficking, or inversely is it the consequence of an increase in trafficking itself?

The numbers available show an international problem that must be solved according to the most basic Human Rights. / Source: UNDOC. 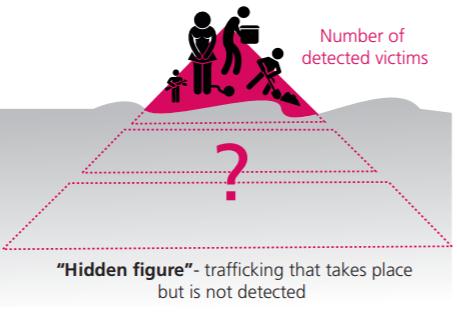 Although all ages and genders can become victims of human trafficking, women are one of the most vulnerable communities. Recalling that trafficking and exploitation both revolve around the purpose of making a profit for the criminal gang, sexual exploitation and prostitution are extremely troublesome consequences of human trafficking. While often ignored by the media and popular news sources, other dangers include organ removal or forced begging, whereby the criminal gang collects the money from the individuals that they coerce into begging. 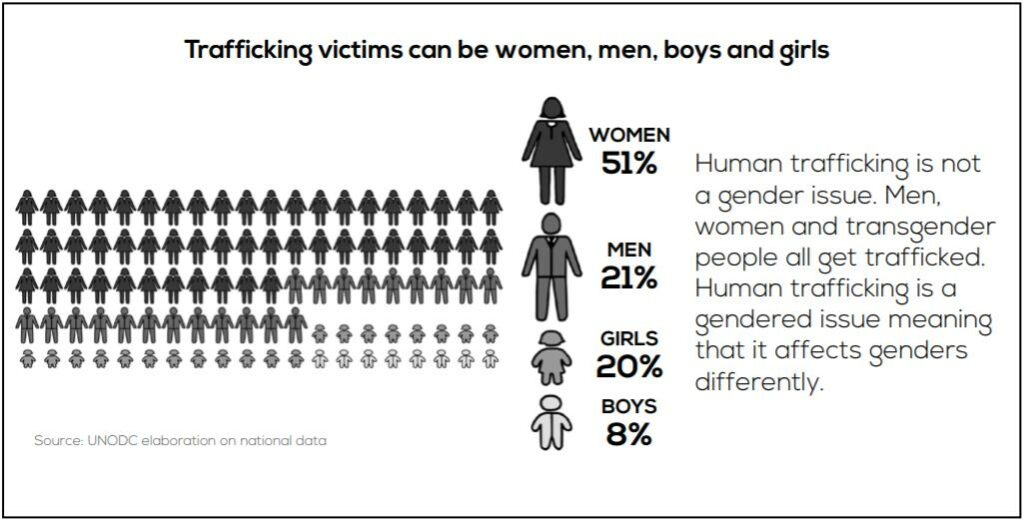 As is the case with most of the challenges that plague Lebanon, human trafficking can’t be fully understood without placing the country into the greater context of the Middle East. The complexity and plurality of the region’s economic, political, and social challenges directly feed into the existence of these flagrant violations of human rights in the form of human trafficking. “In precarious socio-economic conditions or situations involving persecution, people escaping conflict can be more easily deceived into travel arrangements, accepting fraudulent job offers in neighboring countries or fraudulent marriage proposals that are in fact exploitative situations”, reflects the last UNDOC report.

There are several forms of exploitation. In conflict areas considered, those are the main ones. / Source: UNDOC 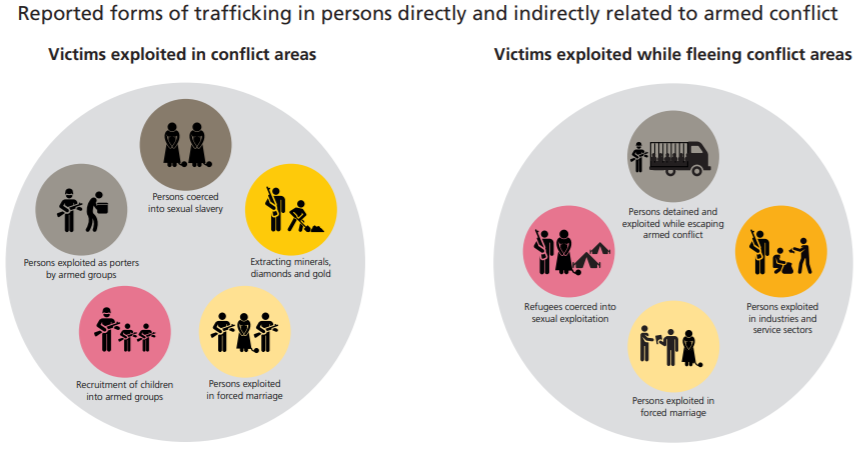 When it comes to the Lebanese case, the UNHCR reflects in their country report how “the Government of Lebanon does not fully meet the minimum standards for the elimination of trafficking”. Given the huge number of refugees that Lebanon hosts on top of the large migrant domestic worker community, Lebanon is filled with vulnerable communities that are at risk of being targeted by human traffickers. The UNHCR also reports that “the government did not directly protect victims or fully implement victim identification and referral procedures stipulated in its anti-trafficking law, which resulted in the potential for some victims to face arrest, detention, or deportation for crimes committed as a result of being subjected to trafficking”.

“Human Trafficking is multifaceted and has no limits. Traffickers often escape punishment; their crimes are not given enough attention and prosecution”. UN Secretary-General Antonio Guterres. Human trafficking strips the victims of their most basic sense of being, and thus also of any respect and dignity. Instead, traffickers turn their victims into mere objects. Governments, administrations, NGOs, IGOs, and even us as individuals all have a role to play in raising awareness about the dangers of trafficking. Despite all the work that has been done, there is undoubtedly still a long fight ahead before trafficking can be truly made a thing of the past. On the 30th of July, the world remembers the thousands that suffer in darkness.

*UNDOC’s document about how journalists must tackle the human trafficking issue in the Arab Countries (2007).