Home Publications Education Programme 2019: Action for the most vulnerable 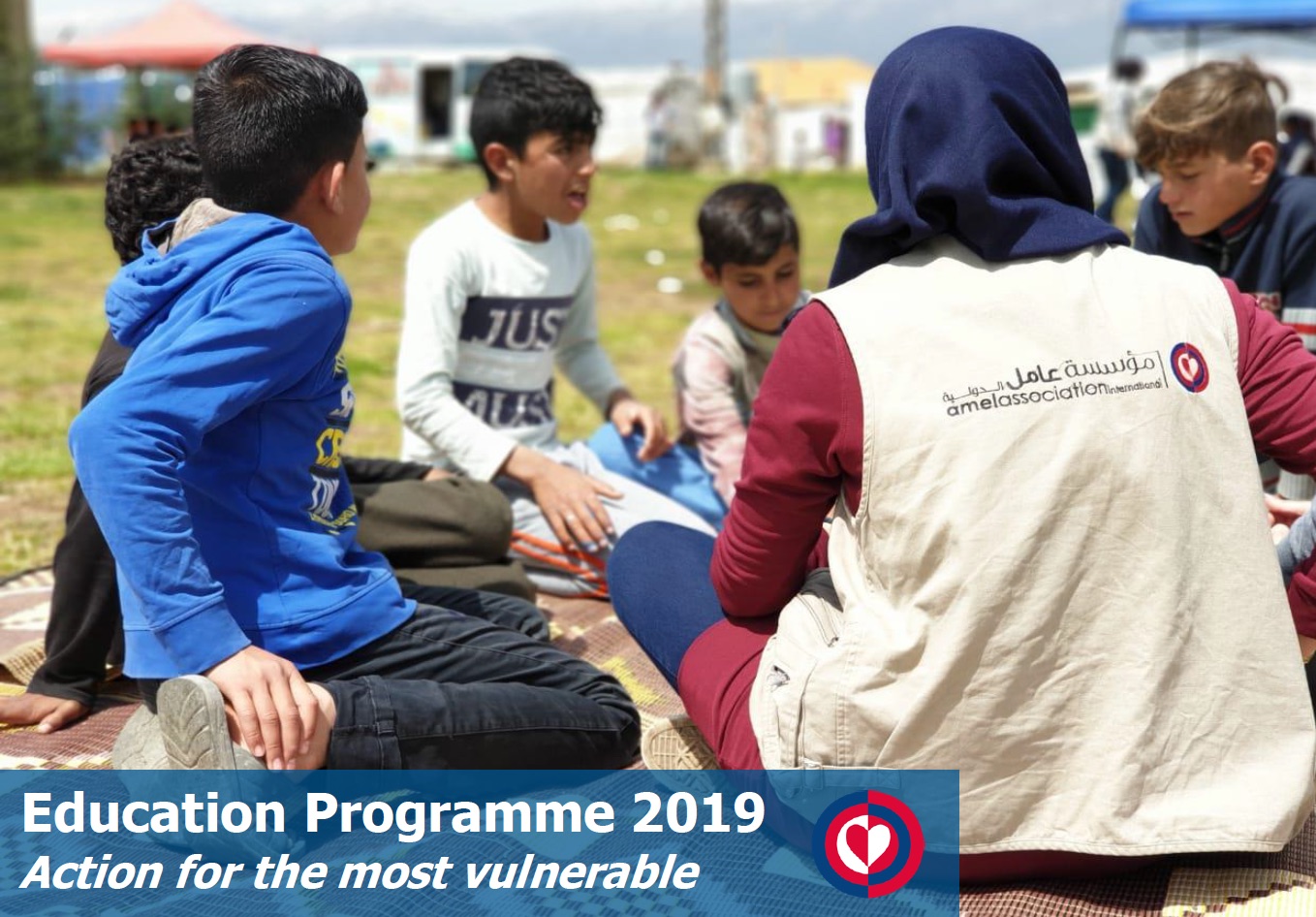 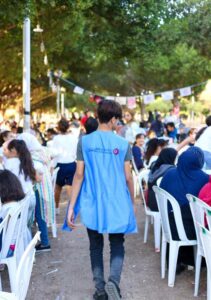 Lebanon is a nation with a longstanding history of war, occupation, internal conflicts and tensions. The socio-economic situation is particularly worrisome, especially considering that 61% Lebanese are now estimated to be poorer than at the beginning of the Syrian crisis in 2011; as a result of the crisis, 1.5 million Lebanese are now considered vulnerable.

Moreover, Lebanon currently hosts the largest per capita refugee population in the world (estimated at 25% of the total population). Approximately 1 million Syrian refugees are registered with United Nations High Commissioner for Refugees (UNHCR), and overall 1.5 million refugees are estimated to live in Lebanon. An additional 50,000 Palestinian refugees from Syria and around 455,000 pre-crisis Palestinian are registered with United Nations Relief and Works Agency for Palestine Refugees in the Near East (UNRWA). Consequently, approximately 3.3 million people are in need of assistance in Lebanon, half of which are women and children.

Education In Time Of Crisis

Youth is among the most directly affected by the Syrian crisis, as attested by the 1.2 million children (from refugee and host communities) who were considered highly vulnerable in 2017. 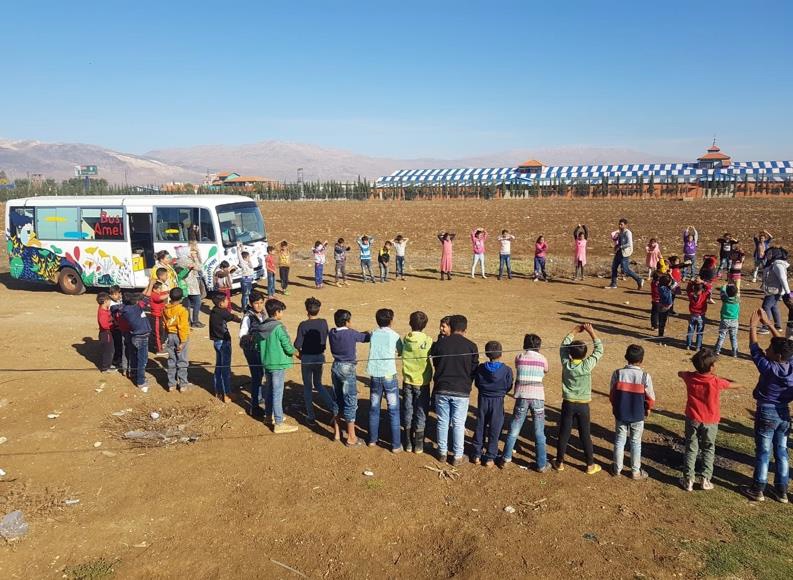 The education system is one of the “basic services sector” most intensely impacted by the crisis, due to a general lack of funds and qualifications among teachers, which led to the drop-out of thousands of children. 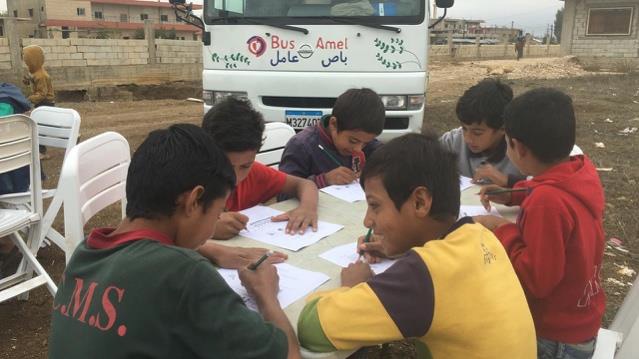 Thus, in 2018, among the 586 640 school aged Syrian children in Lebanon, 58% do not have access to the formal education system, according to United Nations Children’s Fund (UNICEF).

Those who manage to enrol in public schools encounter a range of obstacles: challenges in following the rhythm of the curriculum and the class, due to years spent out of school during the war or exile; the significant differences between the Syrian and Lebanese curriculum; psychological predicament as a result of the trauma suffered; discrimination or harassment; and economic hardship. Consequently, drop-out and school failure rates are critical: among the Syrian children aged 17 to 19 and above, only 11% have completed Grade 9.

Finally, donor fatigue and a decrease in funding of the Syrian crisis response could deprive an entire generation of their right to education. Hence, it is crucial to implement initiatives that aim to improve access to quality education, including in a non- formal, safe and child-friendly environment.

Since the Lebanese civil war (1970s-1980s), Amel implements non-formal education activities for the children displaced by war. Amel has since continued its education and child protection activities with vulnerable children through basic literacy courses and homework support. 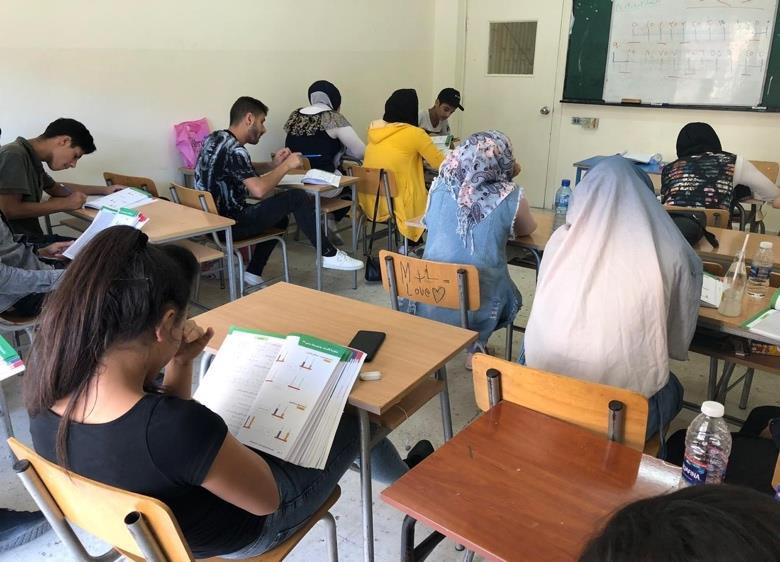 Within the framework of its Syrian crisis response, Amel has tailored its education activities to the aforementioned needs of Syrian and Lebanese children. Notably, Amel has implemented remedial classes and accelerated learning projects in more than 10 of its community centres located in the Beirut / Mount Lebanon, South Lebanon and Bekaa regions, reaching a total of 52,000 vulnerable children since 2012.

Following the Non-Formal Education matrix designed by the Lebanese Ministry of Education and the education sector partners (UN Agencies, NGO, and experts), Amel implements retention activities that aim to help the most vulnerable children between 7 and 14 years old to access, retain and succeed in the formal education system. These children are the most at risk of drop-outs and school failures. Activities also aim at restoring children’s self-confidence, arouse their creativity and foster their ability and will to learn. 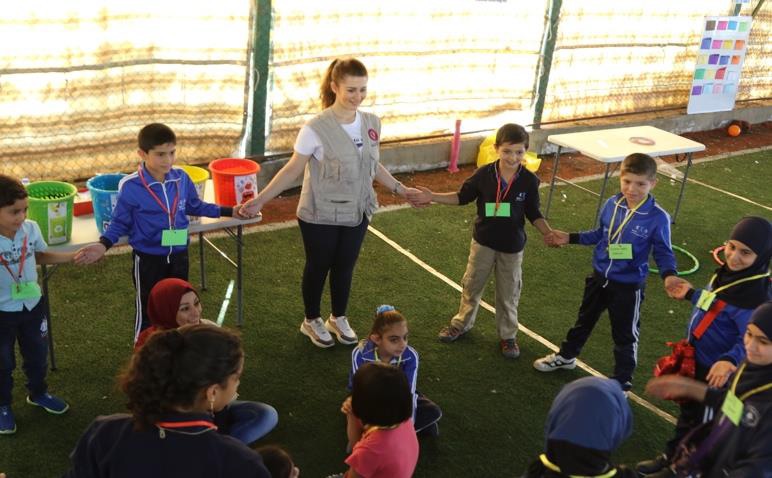 Finally, in addition to daily activities, community events aiming to strengthening ties with families and to encourage social cohesion are regularly organised for the members of the community, as well as awareness raising sessions on various themes (violence, group behaviour, hygiene, self-esteem, etc.). 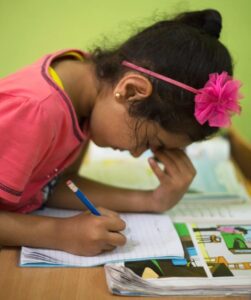 This programme is implemented in Amel centers located in Ain el Remaneh and Haret Hreik, where more than 300 children are enrolled.

In 2019, 160 Syrian and Lebanese students, considered highly vulnerable, benefited from this project in 6 of Amel’s community centers, in Bekaa and South Beirut.

Amel also works on the parental relationship with their child through social worker and psychologist, providing awareness sessions, as well as conducting focus groups to understand the stakes faced by the young beneficiaries. 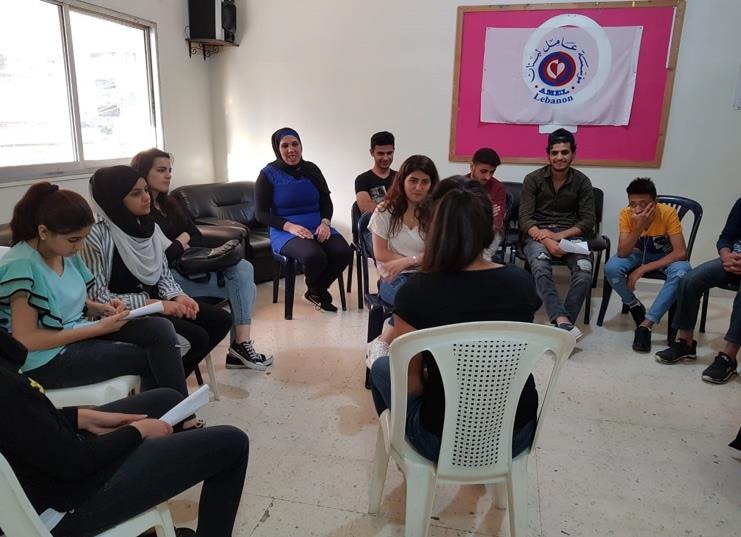 In May 2016, Amel launched a new project of basic literacy and numeracy for vulnerable Syrian and Lebanese youth from 14 to 24 years old. This project, in partnership with the « American Near East Refugee Aid » (ANERA) and UNICEF, targets youths who have never been enrolled in a formal education system or who have missed more than 3 years of education.

Four-month intensive cycles are organised to help these children acquire basic skills necessary to their social integration in society and allow them to access livelihood opportunities. Following an entry test, students are gathered into groups to benefit from English, mathematics, Arabic and IT classes, but also life-skills and health sessions.

A rigorous curriculum is taught by qualified teachers in classes that do not exceed 20 children.

In June 2019, Amel has launched a new project to support 80 French-educated children enrolled in public schools, in its centre of Haret Hreik. 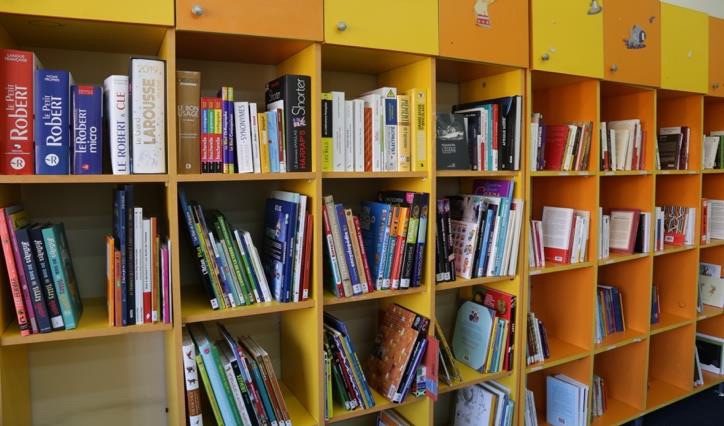 These children, aged from 6 to 14 years, benefit from French remedial classes as well as a psycho-social support thanks to qualified teachers, animators, social worker and a psychologist. Amel also provides transportation, refreshments and school kits to ensure the smooth running of the activities and the engagement of students and families. 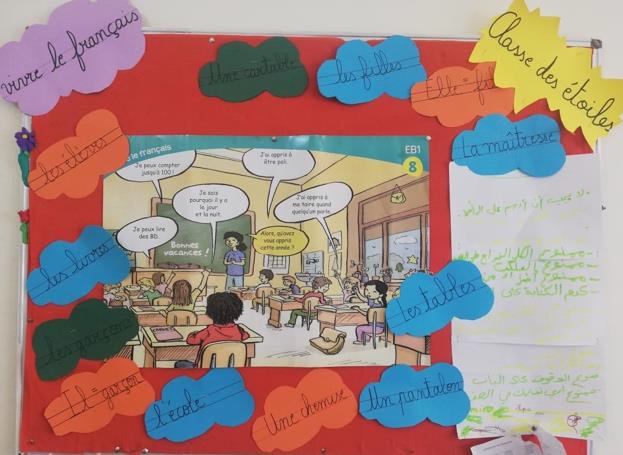 The project started with the inauguration of « L’espace du livre francophone » in Haret Hreik centre, a library of 700 French books, educational games, tablets, etc. A training was also conducted with the field team to ensure the quality of the activities.

Thus, in Autumn 2016, based on this extensive experience within informal settlements and hard-to-reach areas with the – 6 Medical Mobile Units, Amel launched a pilot project of a Mobile Education Unit in Khiam-Marjayoun, to assist vulnerable children in South Lebanon. Since the success of the project gave rise to a second MEU in West Bekaa. 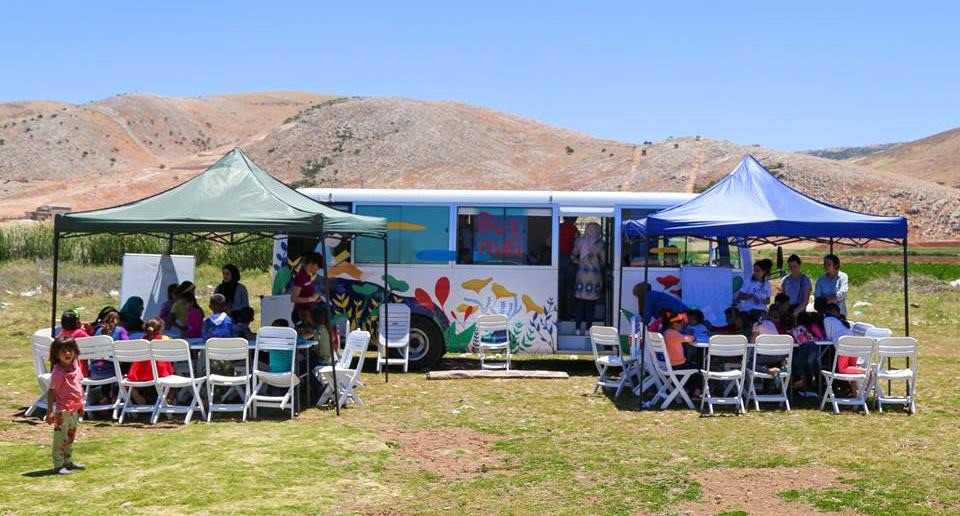 Access to education is even more challenging for children living in informal settlements scattered across Lebanon. Indeed, these children often face subpar living conditions and most of them do not have access to education due to: the distance of the camp from the nearest school, the lack of available spaces in classes, transportation and school supplies costs, of the high frequency of child labour or early marriages in those regions. 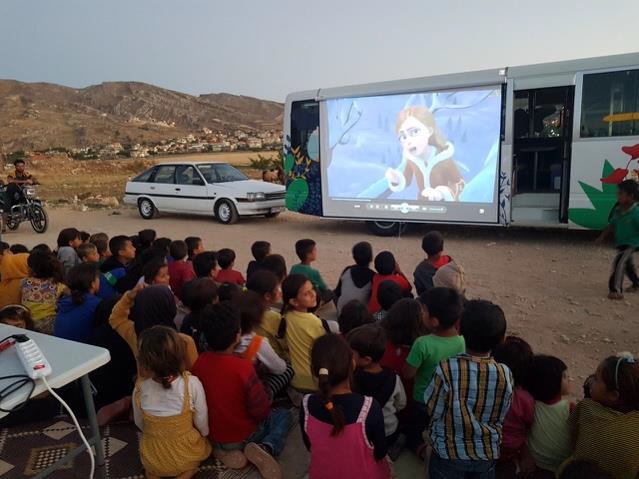 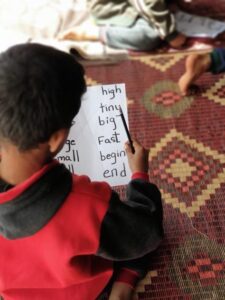 In April 2018, following a needs assessment conducted in an informal tented settlement in Kamed el Loz (West Bekaa), a second Mobile Education Unit was launched. Based on the same model, this new “Amel bus” provides similar activities reaching 600 children. In parallel to the education activities, the social worker and the psychologist organise awareness sessions with children’s parents on various topics related to health, social and cultural issues.

In addition, the Mobile Education Unit reaches out families inside the camps, to make them aware about the importance of education. Finally, public film projections are organized every week in the camps at sunset.

Amel aims including a cultural aspect to each of its programmes, convinced that artistic expressions, performed or observed by the children, are an appropriate way for them to express their creativity, develop their self-esteem and comprehension of the world, and alleviate their anxiety caused by the painful experiences they were confronted to. 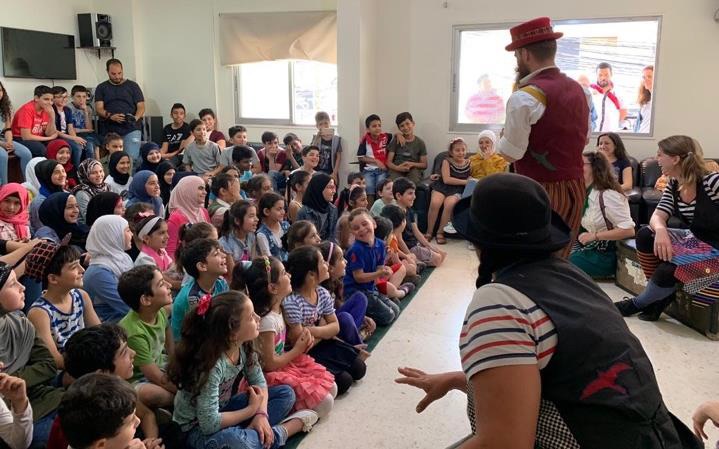 Thus, Amel Association International has partnered with a young French NGO, « Les Enfants de la Méditerranée » (LEM), which aims to develop pilot cultural projects in the informal tented settlements, in parallel of the main activities implemented by the MEUs. Thereby, since May 2017, LEM supports the implementation of circus workshops in the settlements, in partnership with the Lebanese collective « Cirquenciel ».

Likewise, a circus troupe, the « Flying seagull », organizes shows with the children participating in Amel’s projects. In the centres or in the informal tented settlements, this troupe of artists uses its experience to make children dream for a moment.

Finally, Amel has created other partnerships such as with the Lebanese association « Foodblessed ». Consequently, many volunteers help Amel’s teams providing meals and refreshments to the children and their families during events.

Young volunteers of the Lebanese Red Cross are also supporting Amel during the implementation of recreational and awareness activities, during these same events.

A Step Towards Numeric Education! 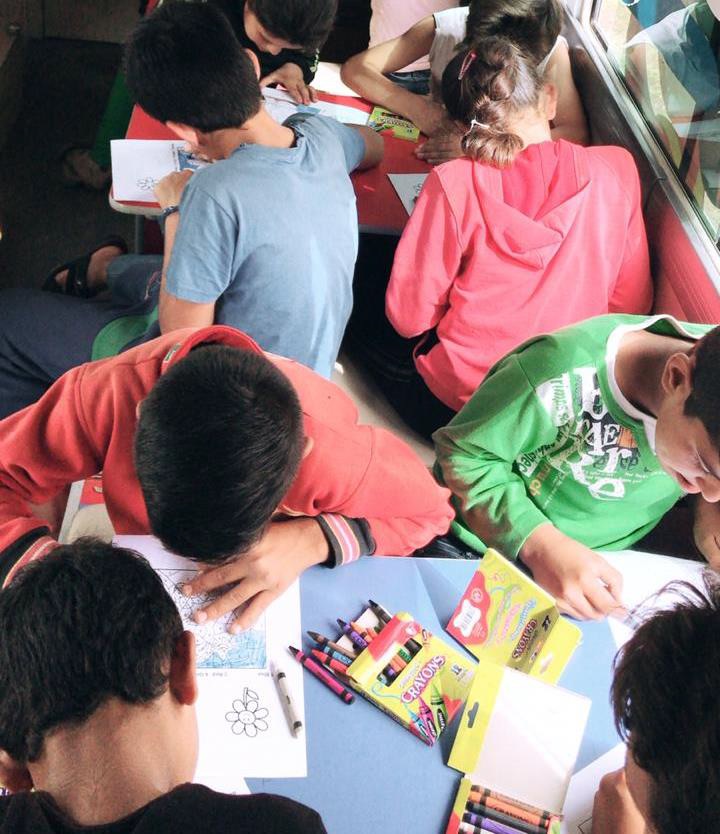 Breteau Foundation offers the opportunity to the children from Haret Hreik and Ain el Remaneh centres to overcome their learning difficulties, thanks to the donation of 50 computer tablets. Equipped with playful and learning software, this tablets enable children to learn by playing, in line with Amel philosophy. 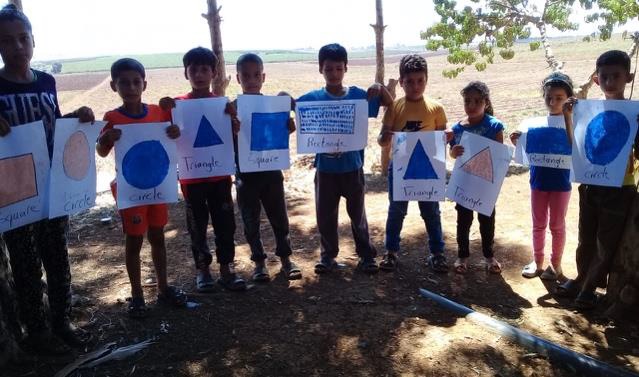 The partners of Amel’s education programme: 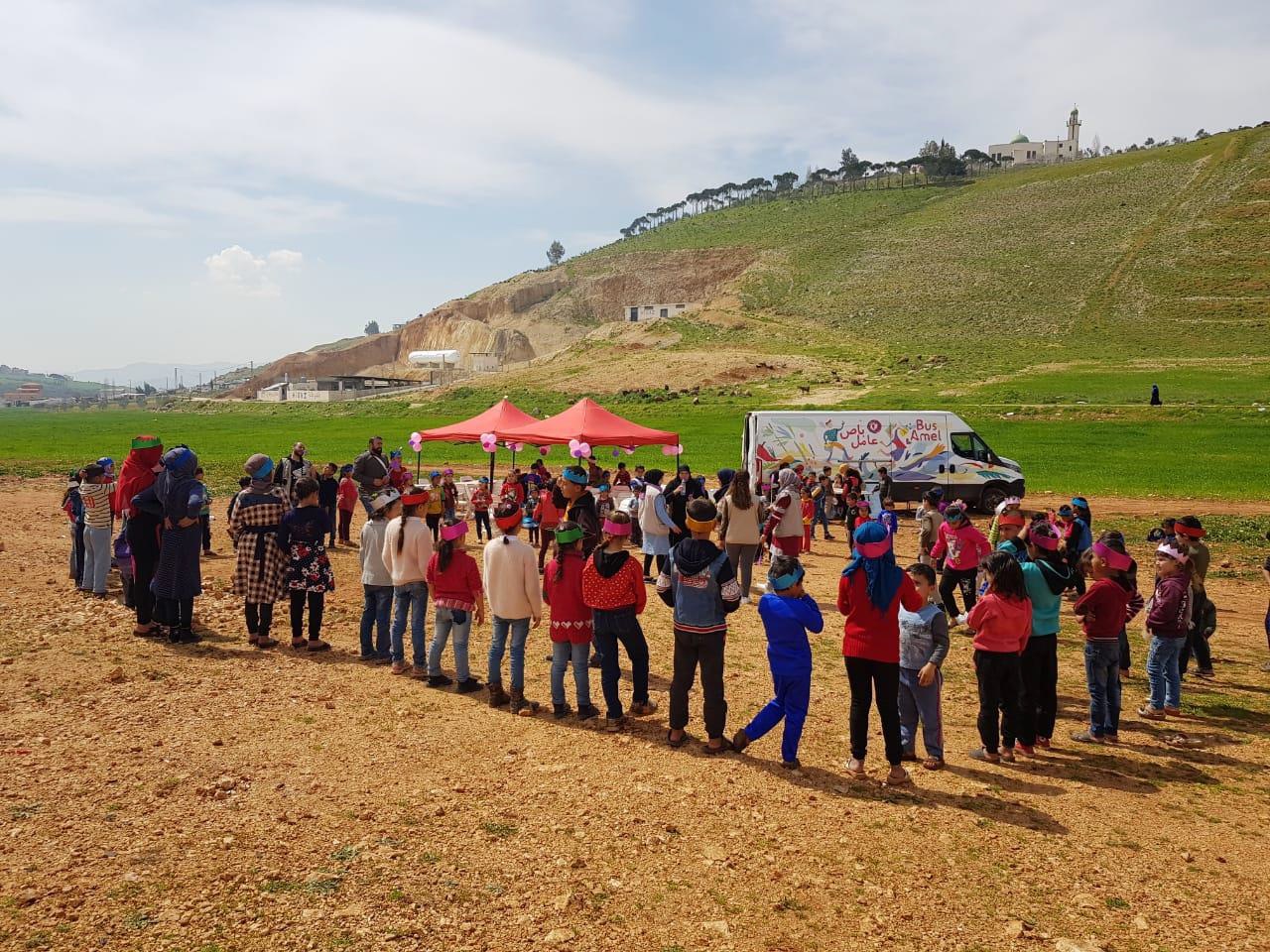