The United Nations special coordinator in Lebanon, Joanna Wronecka, met Amel Association International’s president, Dr Kamel Mohanna, in order to study the possibilities to reinforce the partnership existing between Amel and the agencies of the United Nations. The meeting took place in the association’s HQ in Mussaitbeh in the presence of Virginie Lefèvre, member of the board of directors, as well as the assistant of Mrs Wronecka, Mr Hagop Kouyoumdjian.

Dr Kamel Mohanna, who is also the general coordinator of the Lebanese and Arabs NGOs, highlighted the efforts of the agencies in deploying themselves throughout the Lebanese territory in response to the successive humanitarian crises. He also exposed the course of Amel Association International since its creation, insisting on the fact that this civil and non sectarian organization has been working since five decades in order to preserve human dignity and construct a state of social justice of which we dream and deserve. To this end, its 1,400 workers are currently engaged in the field, through 30 health and development centers, six mobile clinics two mobile education units and a care unit dedicated to street children. The association constitutes in this aspect a model and an alternative for Lebanon. 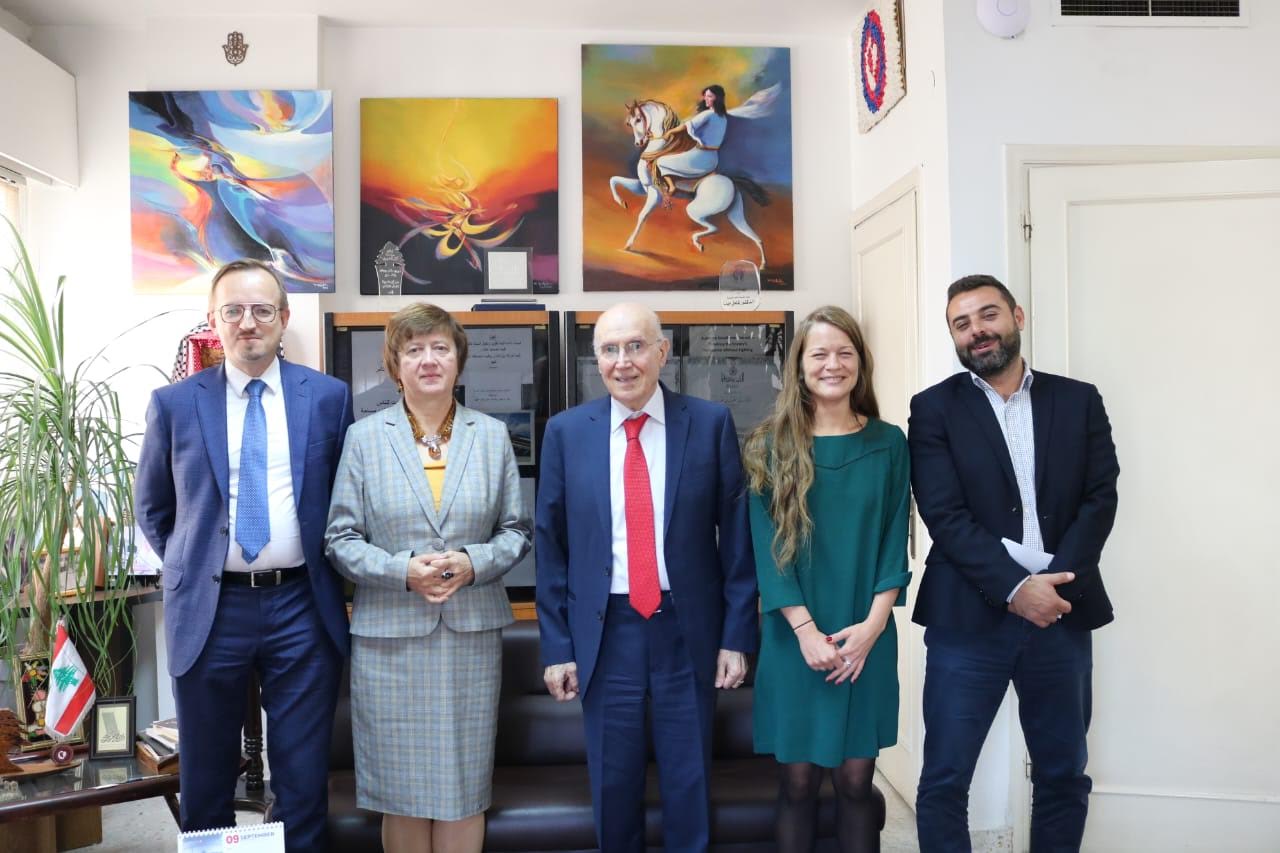 Dr Mohanna underlined that Amel through its local and international branches, advocates for a redesign of humanitarian action, that needs to be engaged and militant in order to preserve the fundamental rights of the marginalized populations. The association also works in favor of the construction of a juster and more humane world in a context where human values are considerably declining in the West. According to the president of the association, it is necessary to work together in order to establish a new and pioneering concept of humanitarian action, which would be based on solidarity and dignity as well as the refusal of double standards, especially between the North and the South, and the commitment to the just causes of the peoples, in the first place the question of Palestine, which constitutes the essence of all humanitarian action.

According to him, sustainable development is the subject of many discourses that are disconnected from the realities on the ground. At the same time, the international community is focusing on the issues of democracy and gender, while the gap between the poor and the rich is widening every day, racist discourse is spreading and the management of humanitarian crises in the world is subject to a double standard. Thus, Amel’s pioneering experience with popular groups and its commitment to the just causes of the people led it to be asked among local humanitarian institutions to coordinate the first phase of the cholera vaccination campaign, which started two weeks ago in northern Lebanon and the Bekaa, as well as to be nominated for the Nobel Peace Prize for the seventh consecutive year.

The president of the association thanked Mrs Wronicka for her support in favor of a supportive actor who works alongside the Lebanese people, while the multidimensional crisis that Lebanon is going through requires the international community to transcend political calculations and prevent the disintegration of the Lebanese society. The suffering of the people, that supported for far too long the burden of all these crisis, must be heard, particularly by removing the obstacles to the recovery of the Lebanese economy and strengthening the funding of many United Nations agencies, such as UNRWA. Today, the needs of the displaced populations are growing and their most basic rights are often violated. Pending a political solution to the crisis in Syria, it is thus necessary to help Lebanon which helps Syria. 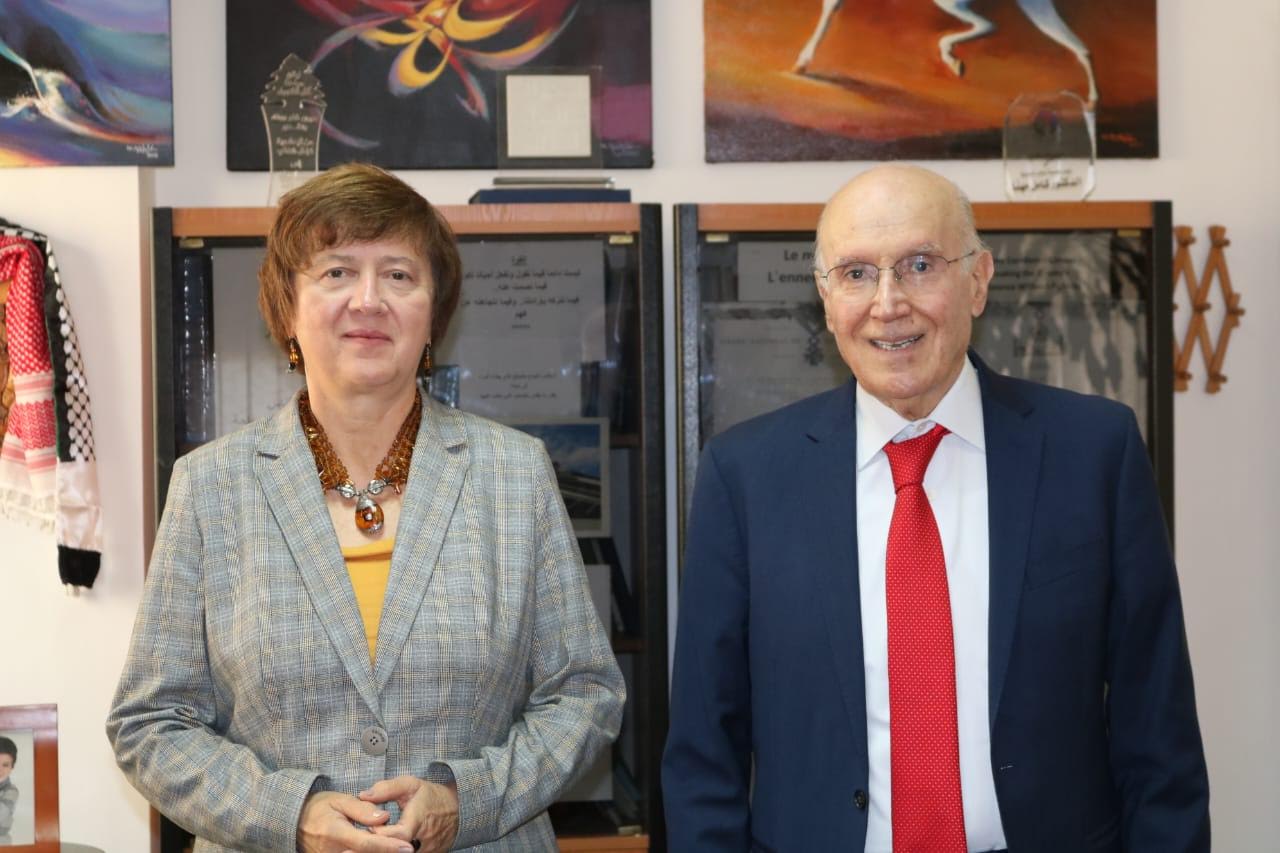 On her side, Mrs Wronecka expressed her admiration for Amel International’s  achievements in particular regarding its capacities to overcome the communitarian divisions from which the Arab world suffer, and its work in the popular areas alongside those left behind, for whom the association acts as a spokesperson. Ms. Wronicka pledged to relay the humanitarian appeal launched by the association to the UN Secretary General, Mr. Antonio Guterres. She also called for a greater mobilization in favor of the Lebanese population.

Finally, noting the deteriorating living conditions of the Lebanese, 82% of whom now live below the poverty line, Ms. Wronecka called for the rapid implementation of reforms in the country, which are the only way for institutions to function properly. Mrs. Wronicka has also been invited to visit Amel centers in the field, which work daily to guarantee the basic rights of the population, such as access to health or education.