Home What We Do #16Days of activism to end #ViolenceAgainstWomen 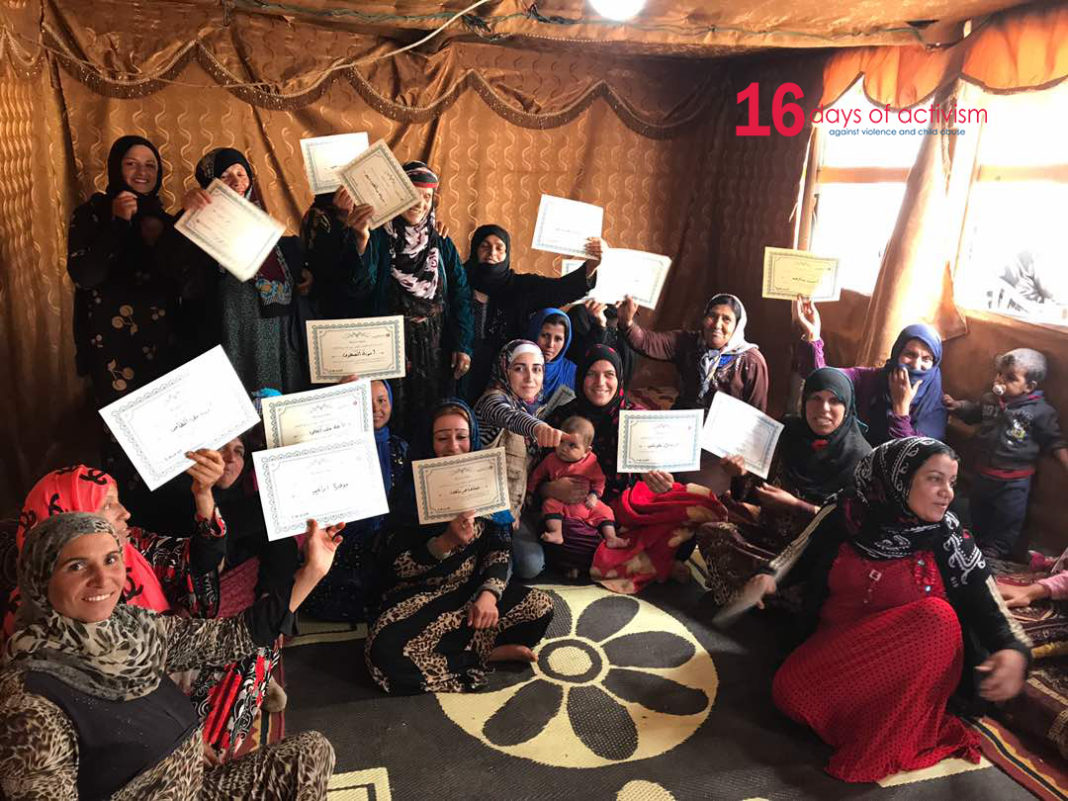 Today marks the International Day for the Elimination of Violence against Women as well as the first day of 16 Days of Activism Against Gender Based Violence.

This campaign runs every year from 25 November to 10 December, Human Rights Day. It aims to raise public awareness and mobilize people everywhere to end violence against women and children and to achieve more equal world free of violence and abuse.

Here at Amel, we work to prevent and respond to all kind of violence against women and children. Through different projects focusing on health, education, vocational training, and protection, women and girls are empowered to claim their rights and play a valuable role in their community.

One of the most devastating human rights violations

Violence against women and girls is one of the most widespread, persistent and devastating human rights violations in our world today.

Gender inequality persists worldwide. Achieving gender equality and the empowerment of women and girls will require more vigorous efforts, including legal frameworks, to counter deeply rooted gender-based discrimination that often results from patriarchal attitudes and related social norms, as stated by the UN Secretary-General, in his latest report on progress towards the Sustainable Development Goals.

Violence against women is the most extreme form of discrimination. According to the aforementioned report, on the basis of data from 2005 to 2016 for 87 countries, 19 per cent of women between 15 and 49 years of age said they had experienced physical and/or sexual violence by an intimate partner in the 12 months prior to the survey. In the most extreme cases, such violence can lead to death. In 2012, almost half of all women who were victims of intentional homicide worldwide were killed by an intimate partner or family member, compared to 6 per cent of male victims.

Another extreme case of violence against women is female genital mutilation/cutting. This harmful practice has declined by 24 per cent since around 2000. Nevertheless, prevalence remains high in some of the 30 countries with representative data. In those countries, survey data from around 2015 indicate that more than 1 in 3 girls between 15 and 19 years of age have undergone the procedure compared to nearly 1 in 2 girls around 2000.

Moreover, only just over half (52 per cent) of women between 15 and 49 years of age who are married or in a relationship make their own decisions about consensual sexual relations and use of contraceptives and health services. That statistic is based on available data from around 2012 for 45 countries, 43 of which are in developing regions.

Research also shows that achieving gender equality helps in preventing conflict, and high rates of violence against women correlates with outbreaks of conflict. Despite the evidence, actions for women’s inclusion, leadership and protection remain inadequate. In some areas, there has even been a roll back on progress.

This year has brought some good news in this regard, as the European Union and the United Nations launched the Spotlight Initiative to eliminate violence against women and girls.

Another initiative that has been helping to expose this scourge is the UNiTE to end violence against women initiative launched in 2008 by the then UN Secretary-General, Ban Ki-moon, which is also supported by his successor, António Guterres.

UNiTE leads the 16 Days of Activism against Gender-Based Violence campaign, which aims to raise public awareness and mobilize people everywhere to bring about change. Those 16 days go from 25th November to 10th December, which is Human Rights Day. The theme of the campaign for 2017 is “Leave no one behind: end violence against women and girls.” This theme reinforces the UNiTE Campaign’s commitment to a world free from violence for all women and girls around the world, while reaching the most underserved and marginalized, including refugees, migrants, minorities, indigenous peoples, and populations affected by conflict and natural disasters, amongst others, first. As in previous years, the UNiTE to End Violence against Women campaign invites you to “Orange the world,” using the colour designated by the UNiTE campaign to symbolize a brighter future without violence. Organize events to orange streets, schools , and landmarks!